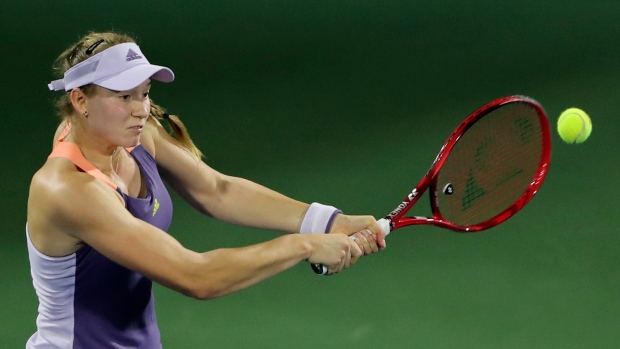 DUBAI, United Arab Emirates — Elena Rybakina of Kazakhstan will play her fourth final of the young WTA season at the Dubai Championships.

Rybakina beat eighth-seeded Petra Martic of Croatia 7-6 (5), 7-6 (2) in the semifinals on Friday, coming from a break down and saving a set point in each set.

So far this year, Rybakina has, in succession, played the Shenzhen final, won Hobart for her second career title, and reached the St. Petersburg final last week.

“It's amazing what (Rybakina's) done already this year,” Halep said.

“I saw her a little bit during some matches. She has a big serve. I have to pay attention on my return and to be like today: Confident, aggressive if there is a chance, just fighting. It's the best thing to do now.”

This week alone, Rybakina has knocked out new Australian Open champion Sofia Kenin and former No. 1 Karolina Pliskova. Against the tricky Martic, Rybakina fought in the rallies to outlast the Croatian. She stopped Martic from serving out the set at 5-4, and came from 3-0 down in the second.

“She has really good slices,” Rybakina said of Martic.

“Her serve, it's not flat like I played with Pliskova for example. It's a completely different style of game. It was not easy to start against her. But I tried to work every point. Second set, I was 3-0 down, but I knew it's going to be easier to win this set than play a third one. I wanted to win the second so much.”

No. 2-ranked Halep goes after her second Dubai title, her 20th singles title, and her first since 2019 Wimbledon.