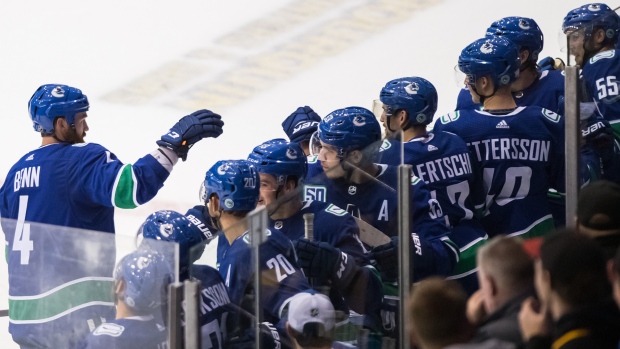 "Probably in peewee or midget," he said Monday after his breakaway tally helped the Canucks to a 6-4 pre-season win over the Ottawa Senators in Abbotsford, B.C.

Benn stepped out of the penalty box late in the second period, collected a puck from teammate Tyler Myers, sped into the Sens zone alone and put a shot past Ottawa netminder Anders Nilsson for his first goal in a Canucks jersey.

"Every now and then you get lucky," he said. "Good things happen when you shoot the puck."

The performance may have earned the 32-year-old blueliner a new role, said Canucks coach Travis Green.

"Put him into the options for the overtime shootouts," he said.

Benn wasn't alone in finding the back of the net in Monday's high-scoring affair.

Elias Pettersson put up two goals and two assists for Vancouver while defenceman Alex Edler had a goal and three helpers. J.T. Miller and Bo Horvat rounded out the scoring for the Canucks, and Brock Boeser added a trio of assists.

Chris Tierney and Rudolfs Balcers each had a goal and an assist for the Senators, who also got tallies from Bobby Ryan and Artem Anisimov.

Nilsson had 25 saves for Ottawa.

Four of Vancouver's markers came on the power play, which struggled last season.

In the first period alone, the Canucks spent nine minutes with the man advantage.

Ottawa was handed a major penalty 7:48 into the game after Vancouver defenceman Oscar Fantenberg was flattened along the boards.

He lay on the ice in obvious discomfort for several minutes before being helped off by a trained. Fantenberg did not return to the game.

Sens right-winger Jordan Szwarz was called for boarding and handed a game misconduct on the play.

While the Canucks scored twice on the ensuing penalty, Green said all the power play time also threw off the cadence of the game.

"It was nice to get a couple of goals there for sure. It's funny — when you get that much power play time, even though we scored, it can throw your team off a little bit," he said, noting that his squad wasn't as sharp in the second frame.

Some veteran Canucks are happy to see the power play clicking early on in the season, however.

"It's always fun when you have a lot of threats from different angles. It's a good thing," said goalie Jacob Markstrom, who stopped 33-of-37 Ottawa's shots.

"(Miller's) really good down low," the Canucks centre said. "But I'm telling him when I'm shooting one-timers, I want him out of the way so I don't hit him and injure him. But yeah, he's great."

Now in his sophomore season, Pettersson is hoping Vancouver can better utilize the power play this year.

"Hopefully we score more goals (this season)," he said. "Because last season, I don't know, maybe we made it too hard for ourselves. I think now we move the puck to an open guy. We shoot the puck and try not to hesitate too much."

"We're in a crucial time and guys are trying to make the team," the coach said. "But also we need to dial in our game as well. And the guys who are definitely on the team, they're included in that. And I thought they did that tonight."

The two teams will square off again in Vancouver on Wednesday.