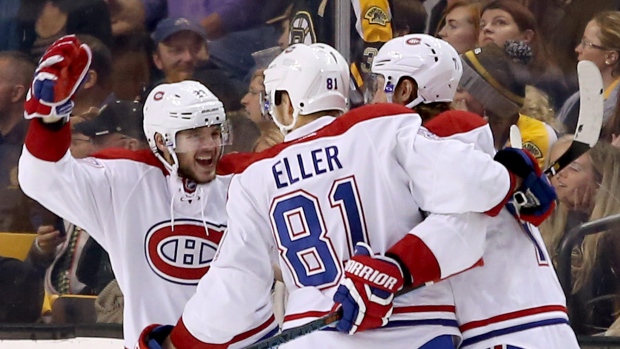 Alexander Semin added two assists and David Desharnais scored for Montreal, which has won the last six meetings between the longtime rivals.

Montreal scored the first three goals and controlled the play throughout, outshooting Boston 38-21.

Carey Price finished with 19 saves for the Canadiens and Tomas Plekanec added an empty-net goal in the final minute.

Boston goalie Tuukka Rask stopped 37 shots and kept the Bruins from being routed.

Matt Beleskey's goal late in the second period was the only offence for Boston until Patrice Bergeron scored with 31 seconds to play.

The Bruins are off to their first 0-2 start in 10 years. Boston played again without captain Zdeno Chara, who sat with an undisclosed upper-body injury. The Bruins clearly missed their supersized defenceman.

Desharnais scored a power-play goal 1:25 into the game and Montreal scored again when Eller scored on a one-timer 2:15 into the second.

Boston coach Claude Julien challenged, but the call stood after a video review and disgruntled Bruins fans let loose with a loud chorus of boos. The Canadiens quickly quieted the crowd 1:07 later when Eller scored on another one-timer to put Montreal up 3-0.

Beleskey cut the lead to 3-1 with 5:34 left in the second on a shot that deflected off a defender and bounced between Price's pads.

Notes: Boston has allowed three straight goals three times already this season. ... Although the two clubs play four more times this season, Saturday was the only meeting in Boston. The Bruins host the Canadiens again Jan. 1 in the Winter Classic at Gillette Stadium in Foxborough. ... Boston C Ryan Spooner received a boarding major and game misconduct for a hit on Semin 3:30 into the third period.