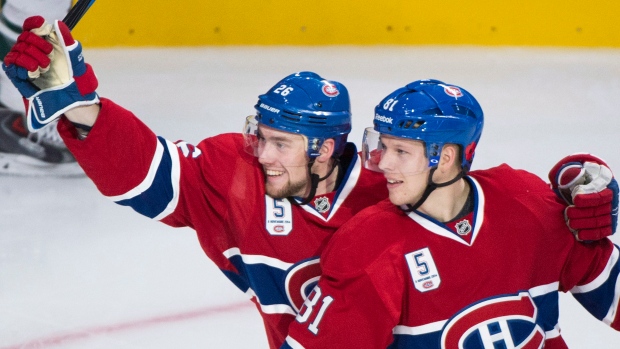 MONTREAL - Jiri Sekac is making a strong case to stay in the Montreal Canadiens lineup.

After sitting out seven games as a healthy scratch, Sekac was one of the best players on the ice on Saturday, helping Montreal to a 4-1 victory over the visiting Minnesota Wild. The 22-year-old scored a goal and added an assist for his first multi-point game of his young NHL career.

"I don't think it can get any better right now," said Sekac, who's played in back-to-back games after missing the previous seven. "It's just an amazing feeling in front of all these fans. I just can't describe it right now."

Sekac, who's battling Rene Bourque, Travis Moen and the currently injured Michael Bournival for playing time, finished Saturday's contest with two points, four shots and a hit in 13:36 of work.

With the Canadiens in front 2-1 early in the third period, the Czech Republic native was rewarded for an already solid game when he poked the puck across the goal-line past a helpless Darcy Kuemper for his second goal of the season.

"I'm trying to get used to every game," said Sekac, who's looking for a permanent place on the Canadiens' starting roster. "Hopefully it's just going to go up now, not the other way."

Sekac was dangerous on several occasions against the Wild.

Midway through the second period, the left-winger came close to padding Montreal's 1-0 lead when he swiped at a loose, bouncing puck in the crease, but failed to connect. Later in the period, Kuemper gloved Sekac's powerful wrist shot, and the Wild goalie again frustrated the 22-year-old from the slot in the third.

"He's skating well, making the right decisions with the puck," said head coach Michel Therrien of Sekac. "Sometimes, taking a step back is not a bad thing. At the start of the season, I saw a player with less energy. Now, he's got his energy back, he's quick, and he's having success right now."

Added Lars Eller: "It's the same thing I said before the season. He's going to surprise a lot of people. He's got skill, and he's a smart player."

Sekac got an assist on Eller's game-winner in the final minute of the second period. After good puck circulation between Sekac, Brandon Prust, and Eller, the Dane fired past Kuemper glove side with a screened snap shot from the faceoff circle.

The Canadiens are undefeated (7-0-0) when tied or leading going into the third, and the storyline was no different Saturday.

Carey Price made 10 of his 30 saves in the third period for his eighth victory in 12 games. With the performance, Price's save percentage jumped from .907 to .912.

After a scoreless first period that saw the Wild come close to beating Price on several occasions, the Canadiens got on the board midway through the second.

Coming down the wing with speed, Brendan Gallagher ripped a slapshot to the roof of the net at 9:26, beating Kuemper for his first point in his last nine games. The goal came just inches from the spot where Eller would later score the game-winner.

The Wild's Jason Pominville equalized at 14:59 of the second, minutes after Sekac came close to doubling Montreal's lead.

Following a bad giveaway by Andrei Markov at the blue-line, former-Hab Thomas Vanek walked into the offensive zone on an odd-man rush, and found Pominville alone at the side of the net for the easy tap-in.

Vanek, in his first return to Montreal since signing a three-year deal with Minnesota in the off-season, finished the game with one point in 17:04. The Austrian played 29 games with the Canadiens last year.

After Eller gave Montreal the 2-1 lead, Sekac's goal wasn't without controversy. The poke-in was made easy as Kuemper, who made 27 saves in defeat, was left incapacitated on the ice after Minnesota's Nino Niederreiter pushed Prust onto the Wild goalie.

The referees and linesmen conferred, and the goal stood because it was a Wild player who hit Prust first.

"I knew I was pushed in pretty hard," said Prust. "I was pushed right into the crossbar. I was sitting there, listening to the ref's conversation, and I heard him say that it was a good goal. I knew before everybody else."

"I didn't really get a chance to react to it," he said. "They (the referees) didn't really want to come and talk to me, and then the puck was dropped at centre ice. I'm obviously not very pleased. I thought we were going on the power play there."

Max Pacioretty put the game out of the Wild's reach with his team-leading sixth of the season at 6:04.

Montreal is now 4-0 when scoring first.

Prior to puck drop, the Canadiens retired defenceman Guy Lapointe's No. 5.

Lapointe played 14 seasons with Montreal between 1968 and 1982 before brief stints with the St. Louis Blues and Boston Bruins. He recorded 622 points in 894 career games, and ranks second in goals by a Canadiens defenceman with 166.

"I am very honoured to be here tonight, 32 years after my last game with the Montreal Canadiens," Lapointe told fans before the ceremonial banner raising. "I never thought that one day, my No. 5 would hang up there."

Nicknamed Pointu, Lapointe holds the Canadiens record for most goals in a year by a defenceman with 28. He was inducted into the Hockey Hall of Fame in 1993.

Notes: Bourque was a healthy scratch for a second consecutive game. Bournival was out with an injured shoulder. … Minnesota's point leader Zach Parise (upper-body injury) did not travel to Montreal. … Earlier in the day, the Habs recalled winger Drayson Bowman from the Hamilton Bulldogs.