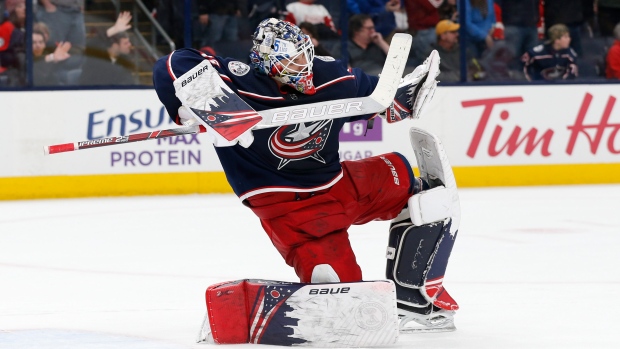 Merzlikins, who took over after Joonas Korpisalo was injured, got a fifth shutout in his last eight games on Friday night in a 2-0 win over the Detroit Red Wings. He’s got back-to-back shutouts and eight straight wins. He is 12-2-0 since becoming the starter. The five shutouts lead the NHL.

And it was probably his easiest win of the season, with Columbus out-shooting the hapless Red Wings 44-16.

“We didn't give them much, but (Merzlikins) made some great saves for us,” Blue Jackets coach John Tortorella said.

Zach Werenski’s second-period goal, his 17th of the season, broke a franchise season scoring record for defencemen for the Blue Jackets, who have won three straight and nine of 10.

The Blue Jackets dominated Detroit but were clinging to a 1-0 lead as the clock ticked down under 2 minutes and the Red Wings pulled goalie Jimmy Howard for a sixth skater. Columbus finally got to breath easier when Boone Jenner got an empty-netter with 1:25 left.

Howard faced a shooting gallery at times, finishing with 42 saves and slipping to 2-21-2 on the season. The 35-year-old has lost 18 straight and hasn’t won since October.

“They just throw pucks at the net,” Howard said. “They’re one of those teams that’s got big bodies up front. They like to work it down low and throw it to the middle and just crash. A lot of shots were in tight.”

Columbus has been on a roll the past two months. They are 9-0-1 in the last 10 and 19-2-5 since Dec. 9, earning 43 of their 69 points in that stretch. The win moved them back into third place in the Metropolitan Division, one point ahead of the New York Islanders and two behind Pittsburgh.

“I think we played well, we didn't give up really anything," Werenski said. "We had a lot of chances, a lot of shots. It would be nice to score a couple more of those, but we're saving those for tomorrow, I guess.”

Columbus is bound to have a tougher time of it on Saturday against Colorado in the second half of a back-to-back.

Detroit is looking for answers in one of the worst seasons in years. The Red Wings had lost nine a row before a shootout win over Buffalo on Thursday night, but had difficulty generating many quality scoring attempts on Friday.

“We unfortunately had been in that situation, too, where you’re playing for pride and sometimes those are the hardest games,” Columbus captain Nick Foligno said. “But I’m proud of us, we’re playing to find ways to win hockey games as a team. And you can see it. The commitment is there, the guys are playing hard for each other and we’re able to feel comfortable in uncomfortable situations.”

NOTES: The Blue Jackets failed to score on three power plays, highlighting one of their weaknesses during the streak. ... Jenner's goal was his first in 15 games. ... Columbus signed D Dean Kukan to a two-year contract extension. ... Red Wings D Patrik Nemeth played in his 300th NHL game and D Filip Hron played in his 100.... Detroit F Darren Helm missed the game with an undisclosed injury. D Madison Bowey left the game in the first period and didn't return. ... Detroit was penalized twice for having too many men on the ice during a shift change.