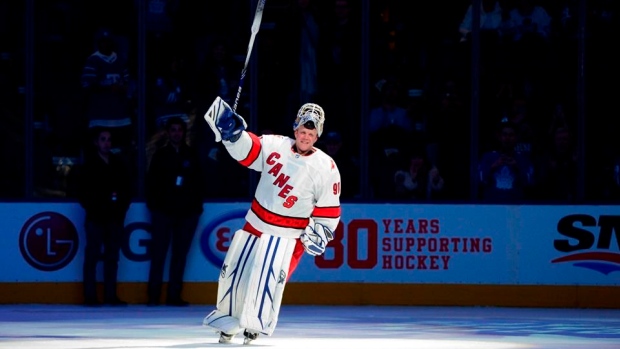 The mother of Carolina Hurricanes emergency goalie David Ayres brought her son to tears during a television appearance with him Monday.

On NBC's "Today," Ayres's mother, Mary, came on a video link to express her thoughts.

Mary was the donor for a kidney transplant her son had in 2004.

The 42-year-old Ayres wiped his eyes in the New York studio as Mary said she was "extremely proud" of her son for his role in Saturday's win against the Toronto Maple Leafs.

Ayres, a Zamboni driver and building operations manager at Toronto's Mattamy Athletic Centre, stopped eight of 10 shots he faced in his NHL debut, helping the Hurricanes capture a 6-3 victory.

"David, I always was very proud of you from the beginning," Mary said. "This has just made me so extremely proud. I have no words. I couldn't sleep for the first night. Last night, I slept and I thought 'OK, I knew your dad and I always said you'd get where you are today.'

"It's amazing. I'll stop because I won't let you cry."

Ayres, who is from Whitby, Ont., was scheduled to make other appearances on American talk shows Monday, including "Fox & Friends" and "CNN World Sport."

He was then to fly Raleigh, N.C., where he will attend the Hurricanes' home game against the Dallas Stars on Tuesday night.

Raleigh Mayor Mary-Ann Baldwin also has announced Tuesday will be "David Ayres Day" in the city.

The Hurricanes have made shirts with Ayres' name and No. 90 on the back and will give royalties to the goalie. Ayres said Monday a portion of the proceeds will go to a kidney foundation in Raleigh.

"I want to make sure people realize just because you have a kidney transplant doesn't mean you can't go on and do anything you want to," Ayres said.

Meanwhile, the Hurricanes returned to practice Monday. The team has recalled goaltenders Anton Forsberg and Alex Nedeljkovic from their American Hockey League affiliate after James Reimer and Petr Mrazek were hurt in Toronto, forcing Ayres into action.

Hurricanes coach Rod Brind'Amour told reporters he was a bit shell-shocked when he was saw Ayres take the ice.

"First impressions weren't great, I'll be honest. When I saw the first shot go in and then the second one, I thought maybe this was (the team) getting punked or something," he said.

"But then talked to him between periods and you could see he had a fight in his eye and this was for real and he was going to try his best. That's all you ask. We don't expect (him) to make miracle saves. That's what he did, he made a couple (saves)."

Brind'Amour was full of praise for his team.

"The group understood what that guy was going through," he said. "He comes in not expecting to play, no one does. We know he's not qualified to be an NHL goalie and yet they understood this was his moment (so) let's make sure we give it all we can for him."

Earlier Monday, the Hurricanes traded a guy Ayres thanked for helping him relax on Saturday — forward Erik Haula — as part of a multi-player deal with the Florida Panthers.

On the Hockey Night in Canada interview in the immediate aftermath of the game, Ayres said Haula told him, "'Just have fun. We don't care if you let 10 goals in.'

"That's what settled me down, and it was great."