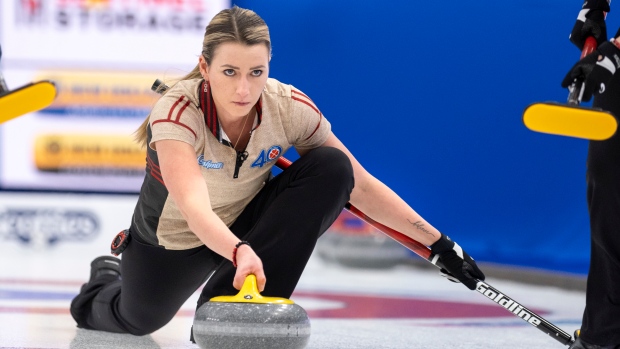 With regular skip Rachel Homan set to compete in mixed doubles at the Winter Olympics next month in Beijing, third Emma Miskew will call the shots and throw last rocks for the team out of the Ottawa Curling Club at this year's Scotties Tournament of Hearts in Thunder Bay.

Regular second Sarah Wilkes will now serve as vice while Alli Flaxey joins the team for the week in the second position. Joanne Courtney will remain at lead.

The team made the lineup change official on Friday night.

While our Skipper represents 🇨🇦 - Ladies & Gentlemen, here is our #STOH2022 lineup!

After provincial playdowns were cancelled due to COVID-19, the Ontario Curling Association selected Team Homan to represent Ontario at the national championship thanks to their high position on the Canadian Team Ranking System. However, if Curling Canada ended up selecting Homan for the country's Olympic mixed doubles team, then Team Hollie Duncan would be Team Ontario at the Scotties.

Homan and John Morris were chosen for Beijing on Thursday morning before Curling Canada announced later in the day that the Scotties and Tim Hortons Brier would expand to 18 teams for a second year in a row. Team Homan qualified as the third Wild Card rink.

Congratulations, and well-earned opportunity, to @johnnymocurler and my dreammate @RHoman89 on the #Beijing2022 nod. Raise hell and let’s hear that 🇨🇦 anthem

Homan and Miskew, both 32, have played together since their bantam years, making eight Tournament of Hearts appearances with three titles. Team Homan has qualified for the last three Scotties finals, losing each time. They also won a world championship in 2017 and represented Canada at the Winter Olympics in 2018.