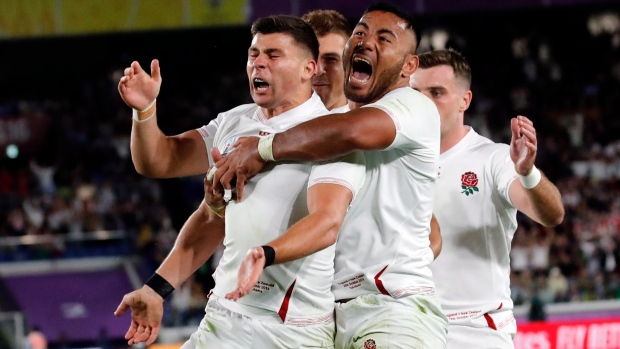 YOKOHAMA, Japan -- Even before the kickoff, England stole a march on defending champion New Zealand.

Respect for customary All Blacks practice? Not in this Rugby World Cup semifinal.

Reserve prop Joe Marler wasn't the only England player standing on New Zealand's side of halfway when the All Blacks performed their famous pre-match haka on Saturday, but he didn't retreat to his own side even when a match official gestured to him about his breach of convention.

After shocking the two-time defending champions with a try to Manu Tuilagi in the second minute, England didn't retreat one bit. And four years after being unceremoniously dumped out in the group stage of the World Cup it was hosting, England reached its first final in 12 years with a 19-7 upset over New Zealand.

The All Blacks hadn't lost a World Cup game since that tournament in 2007, had never lost to England at a World Cup, went into the game on a six-game winning streak in head-to-heads and having won 15 of the last 16.

All those streaks are off. England's Australian coach Eddie Jones had spoken all week of how vulnerable the All Blacks were as the hot favourites, despite describing them as the best team in sport. Jones strikes again.

He coached Australia to the 2003 final which ended in an extra-time loss to England -- so far the Northern Hemisphere's only Rugby World Cup crown.

Jones was a consultant on South Africa's title win in 2007, sealed with a victory over England, guided Japan to a shocking win over South Africa at the 2015 World Cup pool stage and has now got England to the final.

"We've had 2 1/2 years to prepare for it. They've had a week to prepare," Jones said, recalling how England targeted this game when the tournament draw was made. "We've been unconsciously preparing for this."

"I'd like to pay the greatest compliment to New Zealand," he added, "they won two World Cups in a row and they've been a great team, so we had to dig really deep to beat them."

The New Zealanders rallied from 15-0 down to win the last meeting 16-15, but this time England didn't give them a chance. And that included two tries disallowed by the Television Match Official.

"There's no shame in getting beaten by them," New Zealand coach Steve Hansen said. "There's a lot of hurt." What hurt Hansen more was the suggestion that the All Blacks didn't turn up hungry to win. He invited a reporter to step outside the news conference room for questioning his team's commitment.

England will next play the winner of Sunday's semifinal between two-time champion South Africa and Wales. Four years ago, no northern teams reached the semis. This time, teams from the north have at least a 50-50 shot of winning it.

Much will be made of England's V-formation when facing the haka. Farrell didn't take a backward step in responding.

New Zealand was overwhelmed in almost every aspect of the game, with even its try coming from an England mistake when hooker Jamie George overthrew at a lineout. Ardie Savea collected and crossed the line.

The team that was supposed to play direct rugby at first threw the ball right, to the left and back right again before Tuilagi barged over from the base of a close-range ruck.

Tuilagi created another chance when he intercepted a Beauden Barrett floating pass in the eight minute and sent Jonny May away on the left, but with the cover defence closing in the winger's inside pass went to ground.

The first of the disallowed tries occurred in the 25th, when the TMO ruled against Sam Underhill's try because Tom Curry took out two defenders when he crossed in front of a ball-playing Kyle Sinckler.

But Underhill earned a penalty a minute before halftime, allowing Ford to make it 10-0. It was only the second time New Zealand had been held scoreless in the first half of a World Cup game -- the first was in a semifinal loss to Australia in 1991.

Scrumhalf Ben Youngs scurried over the line six minutes after the break, shaping to pass in a cross-field run before darting into a big gap.

But again the TMO overruled, saying that an England player had lost control of the ball in a maul and it was regathered by his teammate in front.

Another Ford penalty made it 13-0 before New Zealand finally scored in the 57th, when Savea caught an over-thrown lineout ball and dived over. Richie Mo'unga converted, and suddenly there was six points in it.

An ominous end of that comeback came on the hour, though, when Underhill caught and tackled Jordie Barrett as New Zealand was launching a counter-attack from deep.

Two further penalty goals and some indiscipline from New Zealand made the buffer too big to come back.

It's been a tough year for New Zealand teams against England, after the Cricket World Cup went to England on an unusual tiebreaker countback.

New Zealand will have to play off for bronze in what will be Hansen's last match in charge. And this loss to England will be tough to come back from.