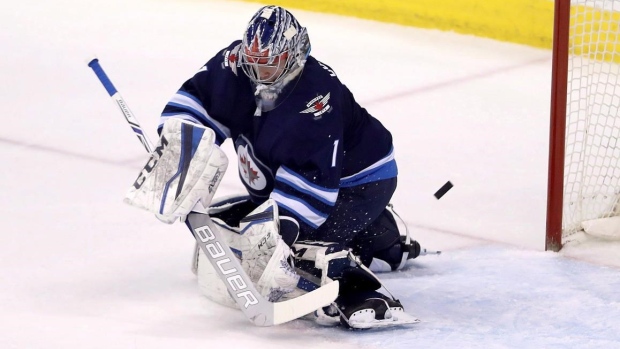 The Winnipeg Jets have agreed to terms with goaltender Eric Comrie on a one-year, $750,000 deal, it was announced Tuesday night.

More Jets news. The Jets have agreed to terms on a 1 year, $750,000 contract with goaltender Eric Comrie. Based on how tight things are financially, Comrie could very well be Winnipeg’s backup goalie.

"Based on how tight things are financially, Comrie could very well be Winnipeg's backup goalie," TSN Hockey Insider Darren Dreger tweeted of the deal.

The 26-year-old has spent time with three different teams throughout the course of a five-year NHL career but has only played in nine total regular season games.

Comrie was selected by the Jets in the second round (No. 59 overall) of the 2013 Draft and played in five games for the Jets between the 2016-17 and 2018-19 seasons. He then had stints with the Detroit Red Wings and New Jersey Devils before returning to the Jets on Tuesday's one-year agreement.

For his career, Comrie owns a goals-against average of 4.08 and a save percentage of .873.

The Jets announced earlier on Tuesday that they had acquired defenceman Nate Schmidt from the Vancouver Canucks in exchange for a 2022 third-round selection.