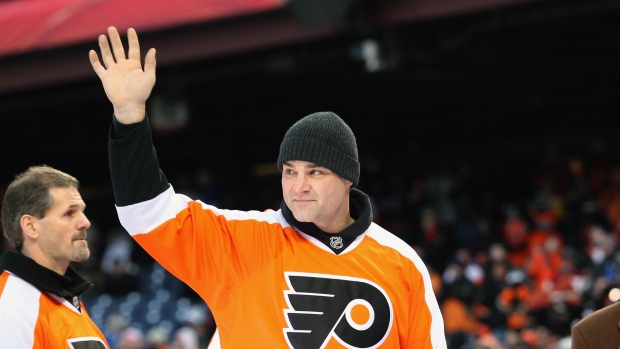 Eric Lindros will get a chance to take a stroll down memory lane Friday night when TSN4 airs the game between the Philadelphia Flyers and Toronto Maple Leafs from Nov. 11, 2016.

It was the annual Hockey Hall of Fame Game and, as part of the class of 2016, Lindros was among the honoured guests.

Lindros says the night was a blur, but he recalls how all the Flyers wore No. 88 sweaters with his name on the back during warm-up. And he certainly remembers the general sense of warmth in the building, especially during the pre-game ceremony.

"I live in Toronto, so to be on the ice and head out for puck drop ... It was a fantastic experience,” he said. “I loved it."

Lindros and fellow inductees Sergei Makarov and Rogie Vachon were interviewed by TSN host James Duthie during the broadcast, which will be included in Friday's replay. The other inductee, the late Pat Quinn, was represented by his daughter, Kalli, who also spoke with Duthie.

The game itself featured an impressive performance by ​Toronto defenceman Morgan Rielly, who delivered the first four-point night of his career. Mitch Marner's enthusiastic response to a goal by Rielly went viral on social media. Lindros had high praise for both Leafs stars during a wide-ranging Zoom interview with TSN this week.

The Big E also made it clear he had big expectations for what the Flyers could do in the playoffs this year, while revealing why his young son Carl is such a big Carter Hart fan. ​The following is an edited transcript of the conversation.

Rielly had a goal and three assists in this game. What is your perspective on his skill set? Does he remind you of any defencemen you played with?

"Morgan is everything. I think he's a fantastic player. When you look at the personalities in that dressing room, he's a real leader in there. I would relate him to a guy that I played with in Eric Desjardins, who was kind of like Mr. Everything. So, a really good first pass, strong skater, good defensively, but doesn't surprise you if they score 12, 15 goals a year because they have the shot and they're on the power play making great plays. You know, he's the real deal."

After Rielly's goal, Marner kind of skipped toward him in glee. His teammates were really giving him a hard time afterwards. He's kind of an Energizer Bunny kind of guy. Did you have any teammates like that?

"In terms of keeping people on their toes with a little bit of humour and some jokes here and there, Keith Jones comes to mind. He always had just that dry sense of humour and something up his sleeve. There's a bunch. There are always a couple practical jokers. Daniel Lacroix also comes to mind. He was very artistic, and he'd go to the chalk board and would do some really good cartoons and make fun of some situations within our team and organization. That's what keeps you going. You get into those long days in February and it's not quite the playoff push and you just want to stay healthy and keep the team winning and it's great to see some humour and have guys that are having fun."

What do you think of Marner’s game?

"He's got amazing hands. It's one thing to stickhandle – a lot of guys can stickhandle – but he can do it at crazy speed with agility. His East-West game is fantastic. He's so agile and his change of pace is there, so he's a threat all the time. He's a terrific hockey player. He's a London [Knights] boy and loves playing here. I'm happy that he's part of the Leafs. When you live in Toronto and see the Leafs a lot, it's nice to see a guy like Mitch Marner."

Auston Matthews didn't score in this game. It was actually his eighth straight game without a goal in what ended up being a 13-game drought, the longest of his NHL career. As a first-overall pick who faced big-time pressure to produce, how did you deal with dry spells?

"They're hard. You take it personally. It's tough. It's just doing the extra little stuff. A lot of times you're just not finishing in practice as well as you might think, whether it's a two-on-one rush or three-on-two rush. Bearing down in practice is a big deal. You do it in practice and it will carry into games when it comes to finish. And, you know, let's not kid ourselves, there's some luck involved and bounces that don't go your way. There's deflections and what not. Droughts happen. It happens. The more you shoot, then sooner or later you'll break out. He's got such an amazing shot, so to even think of that word 'drought' when you think of Auston Matthews doesn't really feel correct."

Does Matthews remind you of anyone you played with?

"I wouldn't say anybody. He's very talented, extremely talented. He's a scorer. He's a pure scorer. He'll use his body to benefit puck possession. He skates well and if he wants to play physical, he's got the body to do it. I think he's a very talented, offensive player."

Wayne Simmonds scored twice for the Flyers in this game. As a Toronto guy, Simmonds always seemed to be pumped to play against the Leafs. What do you remember about playing as a visitor in Toronto?

"You were jacked up. I mean, it didn't happen all that much. Depending on the schedule you got in maybe two times a year, so those were big games. If you were a Toronto Marlie growing up you got a chance to skate at Maple Leaf Gardens in the mornings and then the pro teams would go out for a morning skate and then the Junior A team would come out at 1 p.m. and then the Leaf game was at 7 p.m. The rink was just jammed for the whole day and I remember everything about going through that time, including the Fresca machine that was available for drinks. I haven't seen Fresca in a while, but every time I see it, it reminds me of Maple Leaf Gardens."

Travis Konecny scored a nice goal for Philadelphia in this game. He's also a London, Ont. native. What stands out about him?

"I'm not sure what's going to happen come July, August and what not, but when you think of the East you got Washington, Boston, Pittsburgh's really good, but I thought the Flyers were one of those teams that was going to surprise a lot of people – not just by getting to the second round, but by possibly representing the East. They were on a roll; they were getting great goaltending and I thought there was a chance something great could come of it."

You mentioned goaltending has been a key part of Philadelphia's run. I was interviewing Carter Hart last week and he said your son Carl wants to be a goalie. Is that true?

"Carl loves goalies. Carter was fantastic with him and so was Brian Elliott for that matter. We get into town every once in a while, and he loves to go and check out the pads and watch the goalies. He plays as a player, but in the basement he has fun stopping the tennis balls and playing that way. He's enjoying it. There was one game where the Flyers were playing Ottawa and [Craig] Anderson was warming up just outside the dressing room and Carl was doing exactly what Anderson was doing and there was a little chuckle there. He loves goalies and has his Carter Hart goalie stick in his room and the jersey, and he loves Carter Hart."

Are you on board with Carl becoming a goalie one day?

"I shoot high on my son [laughs]. He'll do what he wants to do. He's enjoying some goaltending. When I played, and I think it still stands true, if we had a really good goalie, they were probably one of the best skaters on our team. So if you're not a great skater you can't be really good at goal. So that's where we're at now."

What did you make of the Leafs this season? They had a strong stretch after the coaching change, but inconsistent overall. Did you think they could make a run?

"It was up and down ... it never helps when you lose 44 [Rielly] and 16 [Marner to injury], those are big people to miss. I mean, it sounds obvious, but when you look at the salary structure of any team and start crossing off two of your top five guys, or whatever the case may be, those are big holes. I believe everyone was mostly healthy by the time the season was suspended and they seemed to like the coach, so who knows?"

What's the biggest difference between playing in Philadelphia and playing in Toronto?

"It's not diluted here in Toronto the way it is in Philadelphia. When I say that I mean they have the [NFL's] Eagles, which is a big pull. But the Flyers have sincere and knowledgeable fans the same as here in Toronto. Everything here is Maple Leafs. There's a lot of similarities. Both sides are knowledgeable, passionate. Philadelphia is almost like an Original Six city. There's not as many suits in the crowd in Philadelphia, I'll say. It's a different crowd, a little more rough and tumble, a little more vocal about some things."

The Hall of Fame weekend, of course, culminates with the induction ceremony on the Monday night. You ended your speech by calling up your brother Brett. You never got to play together in the NHL, but that was a moment you could share. When did you think of doing that?

"Well, his career was short, and he only played a year and a half. He was a first-round draft pick and concussions got the better of him and we wanted to play together. If your brother is in the league it makes it easier in the summer if you’re on the same side, so that was always kind of the plan. It came to mind weeks prior and [I] just kind of did it.

"What a great weekend. What a fantastic time. It's a weekend when you look back and you're just so thankful. It starts with your parents and the sacrifices they made and even your siblings from time to time. And then you got your coaches and trainers and what not, those are people that aren't being paid when you're in junior or minor hockey so they're donating their time, they're donating their heart, they’re donating their energy. There are great teammates. There's just so many great people. Hockey's a pretty special environment. That Hall of Fame weekend is one of the times when you think back and feel pretty lucky."

New HHOF inductee Eric Lindros with brother Brett: "I'd like to close this chapter with you beside me." https://t.co/flmwh6tw7W #TSNHockey pic.twitter.com/kb4VvrfLW1