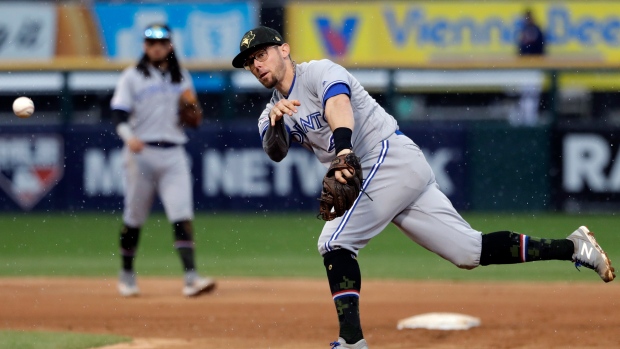 Toronto Blue Jays infielder Eric Sogard has been scratched from Monday's lineup with a left thumb sprain, the team announced.

#BlueJays notes:
Eric Sogard is day-to-day with a left thumb sprain he suffered diving back to first base in Chicago.
After throwing 48 pitches for Triple-A Buffalo on Saturday, 35-year-old lefty Clayton Richard (knee) is likely to make his season debut Thursday on a pitch count.

Sogard was injured diving back into first base Sunday against the Chicago White Sox and is listed as day-to-day.

Richard Urena moves to second base, while Billy McKinney will play left field. Sogard was originally slated to play second base and bat leadoff. Centre fielder Jonathan Davis will now hit in the leadoff spot. Meanwhile, Vladimir Guerrero Jr. is not in the starting lineup because of a scheduled day off.

Meanwhile, left-hander Clayton Richard threw 48 pitches for Triple-A Buffalo on Saturday. He is likely to make his season debut for the Jays on Thursday under a pitch count according to TSN's Scott Mitchell.

Edwin Jackson will get the ball Monday in his second start as a Blue Jay, while David Price returns from the injured list for the Boston Red Sox.