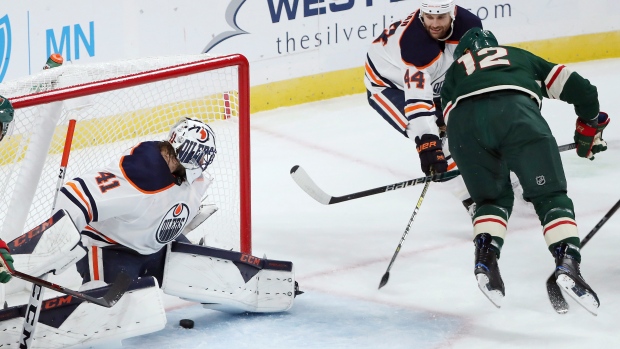 ST. PAUL, Minn. — Coach Bruce Boudreau called it the team's most complete game of the season.

It was done short-handed.

Eric Staal broke out of an early slump with two goals and an assist and Brad Hunt also scored for the Wild, who lost forward Jordan Greenway in the first period and goalie Devan Dubnyk early in the second in a 3-0 victory over the Edmonton Oilers on Tuesday night.

"This team is trending in the right direction after falling on some hard times early. This is the team that we know we had and hopefully going forward this is what we put forth every night," said Matt Dumba, who had an assist.

Minnesota has won two straight games after losing five of its first six.

Dubnyk was upended early in the second period after Minnesota's Ryan Donato fell to the ice while battling the Oilers' Brandon Manning. Dubnyk tried to leap over both sliding players, but fell hard on his backside and appeared to hit the back of his head on the ice.

Playing his 300th game with the Wild, Dubnyk was checked by a trainer before exiting after making nine saves. Alex Stalock came on and finished with 16 saves. It's the second time in franchise history two goalies appeared in a shutout. The other was Dubnyk and Darcy Kuemper on Dec. 5, 2015, against Colorado.

Boudreau hadn't spoken to team trainers before his postgame interview, but is guessing Dubnyk will not practice Wednesday and likely won't travel for Thursday's game in Nashville. The coach is optimistic Greenway will be available.

Greenway was crushed by Josh Archibald as he poked the puck back to Carson Soucy to set up Minnesota' second goal.

"Missing a couple of guys throughout the game, it says a lot for guys to step up and play big minutes," Stalock said.

The Oilers, shut out at Winnipeg on Sunday, have gone 152:38 without goal. Edmonton is 2-2-1 in its past five games after opening the season with five straight wins.

"First time losing two in a row and first real game I thought we probably got outcompeted for most of the game, just on loose puck battles and stuff," said Ryan Nugent-Hopkins, who hit the post on a power play moments after Stalock entered the game.

After a five-point night last Wednesday against Philadelphia gave him 17 points in the first seven games, Connor McDavid has gone three straight without a point for the first time since Dec. 29, 2017, to Jan. 2, 2018. He finished with two shots on goal.

He exceeded that point total in just over five minutes of the first period when Minnesota scored all its goals, the first time this season scoring three goals in a period.

Staal scored his first of the season, putting home a rebound of Greenway's shot. In his 16th season, Staal's previous goal-less drought to start the season was six games.

"Confidence is a big thing for anybody, and I was trying to battle through it there for a bit. Hopefully I've got it and can continue to build and keep trying to help us win games.," Staal said.

Hunt, a defenceman, scored his fourth on a power play four minutes later. Staal got the second assist. It was the first power-play goal allowed on the road by Edmonton in 16 attempts.

NOTES: Edmonton entered with a league-best 38.5 per cent on the power play. The Oilers finished 0 for 2. ... Wild RW Mats Zuccarello was activated off injured reserve after missing four games with a lower-body injury. C Joel Eriksson Ek (lower-body injury) was placed on IR. ... Minnesota is 24-6-1 in the last 31 home games against Edmonton since Feb. 25, 2007.

Wild: At Nashville on Thursday night.