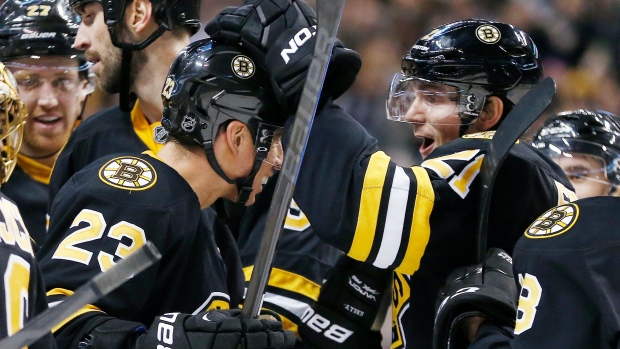 BOSTON - Dougie Hamilton got the Boston Bruins to overtime, and then Loui Eriksson stepped up again.

Eriksson scored 2:14 into the extra session, and the Bruins rallied to beat the Buffalo Sabres 4-3 on Sunday night.

Hamilton scored twice for Boston, including a tying goal with 1:31 left in the third after the Bruins pulled goalie Tuukka Rask. Chris Kelly also scored for Boston, and defenceman Zdeno Chara had two assists.

"It's always fun to score those important goals," said Eriksson, who scored his second OT goal in the past three games. "I don't know why it's been that way but hopefully it continues like that."

Eriksson also lifted the Bruins to a 3-2 overtime win at Minnesota on Wednesday. He has scored eight OT goals in the last six seasons.

Buffalo couldn't quite hang on after holding a 3-2 lead for most of the third period on Tim Schaller's first NHL goal. Schaller was recalled from Rochester earlier in the day and played his third career game 50 miles south of his hometown of Merrimack, New Hampshire.

Andrej Meszaros and Rasmus Ristolainen also scored for the Sabres, who were outshot 37-28. They were coming off a 5-1 loss Saturday night against Colorado.

"The way the game ended, you're disappointed but the effort, we couldn't ask for more," coach Ted Nolan said.

Jhonas Enroth had 33 saves, but could not stop Eriksson on a short breakaway in the extra session. Enroth slumped to a knee and remained in the net for several moments as the Bruins swarmed Eriksson, who finished with a goal and an assist.

Enroth got the start because Michal Neuvirth was ill. Buffalo also lost Brian Gionta after he was on the receiving end of a high hit by Boston's Matt Bartkowski late in the first period.

Buffalo's Marcus Foligno retaliated and was injured while fighting Bartkowski. Nolan said Foligno would be out for a while with an upper-body injury.

Rask had 25 saves, but appeared to be headed for a loss before Hamilton sent a wrist shot over Enroth's glove with time running out in the third.

"Any time you score with the extra attacker you're feeding off that. You have the energy," Chara said.

Hamilton also had a power-play goal in the first, lifting Boston to a 1-0 lead. Meszaros responded with his first of the season at 6:06 of the second and Ristolainen gave Buffalo a 2-1 lead that lasted all of a minute before Kelly tipped in a shot by Chara with 4:24 left in the period.

Schaller gave Buffalo a 3-2 lead 1:27 into the third for his first career point. His parents made the trip south and stood cheering as the Sabres congratulated the rookie centre.

"I didn't even know how to celebrate," Schaller said. "I threw my hands up. They gave me a hug so I guess that's all I needed."

NOTES: Hamilton also had an assist. ... Bartkowski played in his 100th career game, although not for long. He received a game misconduct after the hit on Gionta and subsequent fight with Foligno 14:08 into the game. ... Meszaros hadn't scored since March 30 last season against Philadelphia. ... Hamilton's first goal ended Boston's 0-for-11 power-play slump.