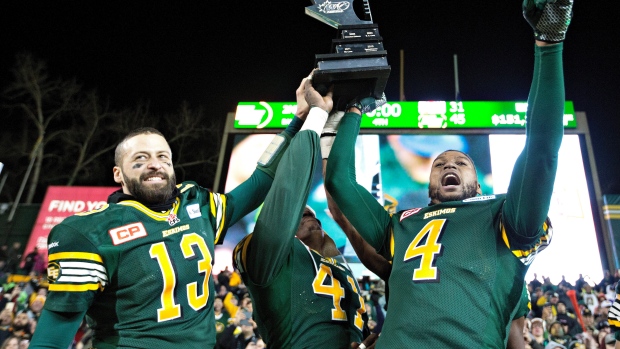 EDMONTON - Edmonton Eskimos quarterback Mike Reilly shredded the Calgary Stampeders in the CFL West Final Sunday, punching his team's ticket to the Grey Cup for the first time in a decade.

Reilly threw for three touchdowns and ran in two more as the Eskimos defeated their southern Alberta rivals 45-31 in front of 34,414 fans at Commonwealth Stadium.

The Eskimos will play the Ottawa Redblacks next Sunday at Investors Group Field in Winnipeg in the 103rd Grey Cup.

"We got one more to go and that's the ultimate goal," said Reilly.

The Redblacks defeated the Hamilton Tiger-Cats 35-28 in the East Division Final earlier Sunday.

The last time an Ottawa team was in the Grey Cup was 1981, when the Rough Riders lost to the Eskimos 26-23.

"It was execution," said Reilly talking on the field after the game as fans chanted his name.

"We weren't giving up the big play defensively, and we were marching down the field and not taking penalties and not turning over the ball offensively.

"We slowed down a bit in the fourth quarter ... but we played enough for three that it didn't matter."

It's a bit of revenge for the Eskimos, and Reilly, the 30-year-old from Kennewick, Wash., now in his third season as Edmonton's starting QB.

Due to a broken foot and other injuries, Reilly saw limited action in last year's West Final, which saw the Stampeders rout the Eskimos 43-18 at McMahon Stadium en route to a Grey Cup championship.

"There aren't too many times in this business you get a chance to rematch anything," said Bowman.

Reilly missed almost half the regular season due to torn knee ligaments, but came back to lead the Eskimos to nine consecutive wins, including Sunday's victory.

The Eskimos last went to the title game in 2005, defeating the Montreal Alouettes 38-35 in overtime.

The first half saw the Eskimos defence bend but not break as the Stampeders used tailback Jerome Messam either running the ball or on play action to move the ball on Edmonton's notoriously stingy defence.

Four times Calgary quarterback Bo Levi Mitchell drove the offence down the field only to have the drives stall. Rene Paredes kicked four field goals of 44, 16, 48 and 10 yards.

He added a 49-yard field goal in the third quarter in a lost cause for Calgary.

Four plays later Reilly ran up the middle from the one yard line. A two-point convert made it 8-0.

The Eskimos added their second major late in the second quarter on a 15-yard pass from Reilly to Bowman as the Stampeders defence seemed to tire.

Reilly hit Bowman on a crossing pattern just inside the five. Bowman outraced the defender to the pylon for the score.

Sean Whyte added field goals of 32 yards and 17 yards to round out the Eskimos' first-half scoring.

In the second half, Edmonton took control of the game for good.

Reilly hooked up with slotback Kenny Stafford on a 33-yard pass-and-run play barely three minutes into the third quarter to make the score 28-12.

Reilly then put the final nail in the Stamps' coffin on the first play of the fourth quarter, hitting wide receiver Derel Walker in stride over the top for a 57-yard touchdown to make the score 38-15.

The Eskimos got the ball right back on an interception by linebacker Dexter McCoil. Four plays later, with more than 11 minutes left in the game, Reilly faked a pass and scrambled eight yards up the middle to make it 45-15.

"They (the Eskimos) were definitely the better football team today. They made the plays when they had to," said Mitchell.

"They made the adjustments at halftime and we didn't."

The weather was not a factor in the game. It was a relatively balmy 5 C at kickoff with mild wind at field level.

It was a sour last hurrah for Calgary head coach John Hufnagel, who now leaves the sidelines to focus full time on his general manager duties.

The game marked the first-ever meeting of 14-4 teams in the CFL playoffs and tied the record for most combined wins (28) by division finalists.