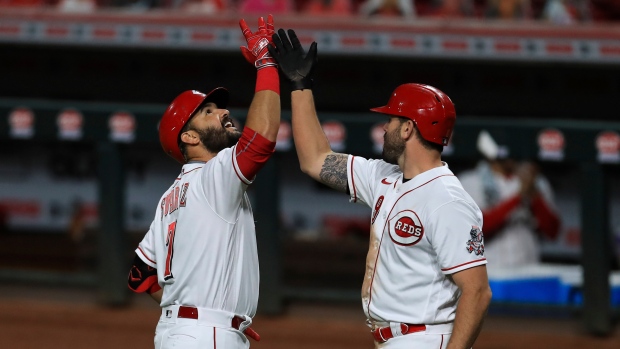 CINCINNATI — The Reds aren't wilting in their first exposure to September playoff pressure in many years.

The Reds (28-27) won for the eighth time in nine games, a season-best surge that's put them back in playoff contention. They're chasing the Cardinals for second place in the NL Central.

“The whole team is working perfectly,” Castillo said. “We've won eight out of nine. Everything is going our way.”

The Reds are coming off six losing seasons and haven’t been to the playoffs since 2013. They spent $156 million in the off-season — one of the majors' biggest splurges — to try to reverse course.

And now, they've got their chance.

“The last few games we've played like this is our year," Suárez said. “We've got to play all the rest of the games like they're also playoff games.”

The Brewers (26-27) had their season-high four-game winning streak snapped, wasting a chance to move above .500 for the first time this season. They've reached break-even seven times.

“I know we're chasing two teams, St. Louis and Cincinnati,” said Brandon Woodruff, who gave up Suárez's pivotal homer. “Honestly I haven't really looked at the record. We know we're pretty much neck-and-neck, and we know we need to win these games.”

Milwaukee reached the playoffs each of the last two seasons with hot Septembers, including a 7-1 win at Great American Ball Park last Sept. 25 that clinched a wild card. The Brewers couldn't keep it going in their return.

Suárez connected in the sixth inning off Woodruff (2-5), who had repeatedly escaped threats. Suárez fell behind 0-2 in the count, barely fouled off a pitch, then hit his 14th homer off a fastball. Woodruff fanned nine in 5 2/3 innings.

“I had him right where I wanted him,” Woodruff lamented. “I've gone over this in my head a few times about how he was able to get such a good swing off on that pitch.”

The Reds pulled away in the eighth against Drew Rasmussen. Curt Casali led off with a homer and Mike Moustakas added a three-run shot.

Castillo (4-5) has gotten back into form as the shortened season has gone along, winning his last four starts with a 1.25 ERA over that span. He gave up four hits and fanned nine in 6 2/3 innings.

“He's not afraid of any situation,” manager David Bell said. “He loves being out there in big games. It was just a big start in a big game.”

Jedd Gyorko homered off one of Castillo's few mistakes, connecting on a hanging, 0-2 slider in the fifth inning. Castillo dropped his head in disgust as soon as Gyorko made contact.

Amir Garrett relieved Castillo with runners on second and third and retired pinch-hitter Tyrone Taylor on a grounder to preserve the 2-1 lead. Jace Peterson hit a two-run homer in the ninth off Nate Jones.

QUOTE OF THE DAY

“It makes me sad the fans of Cincinnati can't see this right now.” — Casali on playing in front of cutouts but no fans.

Brewers: C Manny Piña won't start baseball activities until next week as he recovers from an injured right knee.

Reds: RH Sonny Gray (5-3) will come off the injured list and start the second game of the series. Gray hasn't appeared in a game since Sept. 10 because of a strained back.

Brewers: LH Brett Anderson (3-3) makes his second start since he was scratched because of tightness in his hip. He's 1-1 with a 3.72 ERA in two starts against the Reds this season.

Reds: Gray's back issues limited him to a total of four innings in his last two starts with 11 earned runs allowed.