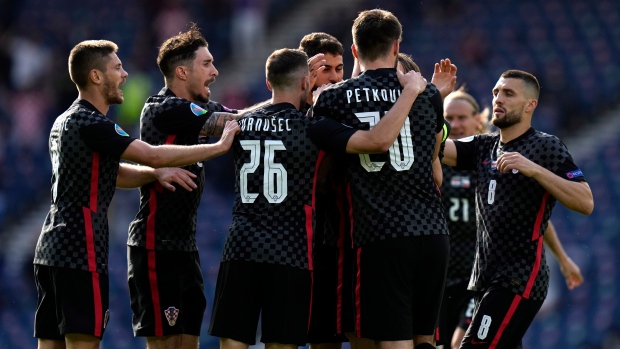 A 1-1 draw in Glasgow put the Czech Republic on the verge of the knockout round and kept Croatia's hopes of advancing from Group D alive.

Ivan Perisic's thumping goal in the second half cancelled out Patrik Schick's first-half goal, his third of the tournament, from the spot with everything to play for heading into Tuesday's final matchday.

Sluggish again for a second straight game, Croatia found themselves in trouble a little before the half. Off of a Czech Republic corner, Schick was fastest to it, meeting it with a header, but before he could make contact, he received an elbow to the nose from defender Dejan Lovren, making his tournament debut. A VAR check adjudged that the elbow was a foul and the Czechs were awarded a penalty. The Bayer Leverkusen man stepped and sent Dominik Livakovic the wrong way for the 1-0 lead. The goal took Schick to the top of the Golden Boot race as the first man to three goals.

Coming out of the restart, Croatia showed the greater intensity and urgency. Zlatko Dalic's men were rewarded for their better spell of play in the 47th thanks to Inter winger Perisic and a beautiful individual effort. Storming down the left side, Perisic cut back inside, got past his marker and unleashed a belter into the far corner to make it 1-1. The goal was Perisic's 29th in a Croatia shirt, putting him joint-third on the all-time list, now trailing only Davor Suker (39) and Mario Mandzukic (33).

After a frenetic start to the second half, the pace greatly waned with both team seemingly content with the splitting the points. The Czechs move provisionally atop the group on four points with the draw giving Croatia its first point of the tournament.

England takes on Scotland later on Friday in Group D's other match from Wembley Stadium in London.