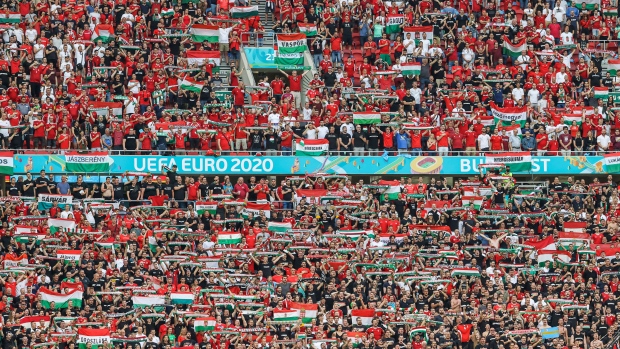 If France thought that the Hungary fixture might be the one Group F match where the World Cup holders could afford to take their foot off of the gas pedal, the Magyars’ match with Portugal will have quickly disabused them of that notion.

Coverage of France and Hungary begins at 8:30am ET/5:30am PT on TSN 1/4 and streaming on TSN.ca, the TSN App and TSN Direct.

While the scoreline said 3-0 Portugal, it hardly told the actual story of the match. Hungary was fearless and defended bravely, but simply couldn’t hold out over 90 minutes against a more talented squad.

Seeing what kind of industriousness Hungary offers, Les Bleus can ill afford to not match their opponent’s intensity, especially in front of a rabid home crowd in Budapest.

"They’re a combative and hard-working team, as well as being very well organized,” France manager Didier Deschamps said. “I think them having an Italian coach explains a lot of that. They’re at home and I'm expecting them to show the same commitment they did against Portugal."

France is coming off of a hard-fought victory over fellow European giants Germany on Matchday 1. While Die Mannschaft hardly rolled over, at no point during the match did it seem like it was getting away from France despite only the 1-0 lead on an own goal from Mats Hummels. Deschamps found the right balance in the selection of his XI, one that he plans to stick with on Saturday…maybe.

"It might be the same team but there might be a few changes,” Deschamps said cryptically. “You’ll find out [Saturday]."

But having picked up a win in their opening match, Deschamps knows that beating Hungary will grant them passage to the knockout round. Still, he is loath for his team to get ahead of themselves.

"The first group match is important but never decisive,” Deschamps said. “The first game was even more important here because of the context of the group. If we win again then we’ll be qualified after two matches. That’s our first objective and we’ll take things step by step."

An unused substitute against Germany, France will be without the services of Kingsley Coman on Saturday. The Bayern Munich winger has left the squad to go on paternity leave.

Perhaps nobody on the Hungary squad will be more excited to take on France than Loic Nego. The Fehervar midfielder is Paris-born and represented France at multiple levels before reclassifying last year to play for Hungary’s senior team. In 2010, Nego was a member of the France team that captured the European Under-19 Championship alongside current Les Bleus squad member Antoine Griezmann.

“It’s indescribable,” Nego said of his feelings heading into Saturday. “It's exceptional, especially for my family and my friends. To be on the field against France will be emotional. But once the whistle blows, you forget, and put all that to one side, and give your best until the end.”

“Griezmann and I won the Under-19 EURO in 2010,” Nego said. “Those moments will stay with me forever. He was my roommate. We were always together. It will be special to see him and to not play together but face each other."

Though the match against Portugal might have been a moral victory for Hungary, it wasn’t an actual one. The Magyars know that getting something from the France match is an absolute must if they have any intentions of reaching the Round of 16. But getting a point or more on Saturday could be easier said than done.