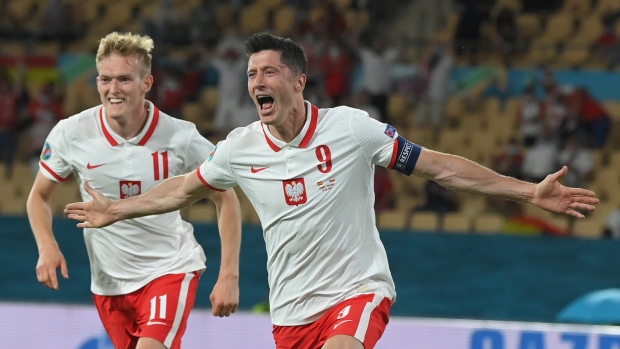 After falling behind Spain 1-0 on Matchday 2, Poland looked primed to crash out of Euro 2020 with a second consecutive loss. But talisman Robert Lewandowski had other ideas.

The Bayern Munich striker’s 54th-minute goal earned the right for the Eagles to fight another day and seek passage to the knockout round for a second straight Euro thanks to the 1-1 draw. The path to the Round of 16 for Paulo Sousa’s team is simple – beat Sweden on Wednesday or go home.

Coverage of Sweden vs. Poland begins at 11am et/8am pt on the TSN2 and streaming on TSN.ca, the TSN App and TSN Direct.

“Team spirit is much better after the second game than before,” the Juventus No. 1 said.  “After the first match there was anger, but in a positive sense. Usually when we lose it makes us sad or angry. Sadness is a very negative emotion, and anger usually causes a very positive reaction. We experienced that in the second match.”

The country’s all-time leading scorer, it’s no surprise that it was Lewandowski who came to Poland’s rescue against Spain.

“Robert is very cool and collected, although against Spain you could see a slightly different Robert – a bit angrier, which gave positive energy to the team,” Szczesny said. “He's a great leader. He doesn't shout at players like people imagine a skipper should do, but he leads by example. Young players have someone to look up to.”

While Szczesny acknowledges the match with Sweden is going to be a major test for his team, knowing what needs to be done allows the team to simplify their game plan.

“We need to score,” he said. “Mentally, it is pretty easy when you know you have to win the match. No need to speculate. So the mental approach to such a game is much simpler because you don't leave any energy for the last few minutes or the next match. You play for your life, and I think that can help us.”

As for the Blagult, Monday’s results meant that their four points were enough to already secure a spot in the Round of 16. But that doesn’t mean there’s nothing to play for on Wednesday. Where Sweden plays and who they might play in the knockout round remains very much up in the air and the Swedes can control their own destiny.

”It’s nice to be through to the Round of 16 already after just two games,” captain Sebastian Larsson said. “But we want more, so of course we’ll go for the group win.”

A win against Poland and Sweden tops Group E. That would send Janne Andersson’s team to Glasgow on Tuesday for a date with one of the top third-place teams. While this is Sweden’s goal, Larsson believes they’re in for a fight on Wednesday.

”I watched their match against Spain where they were forced to work hard defensively, and they did it well as a team,” Larsson said. “Lewandowski showed with his goal how dangerous he is inside the box, which of course we knew already.”

Historically, Sweden has had the upper hand in any matches against Poland, posting a 14-4-8 mark, but the teams haven’t played one another in just over 17 years, so it’s impossible to divine anything from past results. The last time these two teams met was a June 2004 friendly in Stockholm when the Blagult were 3-1 victors.