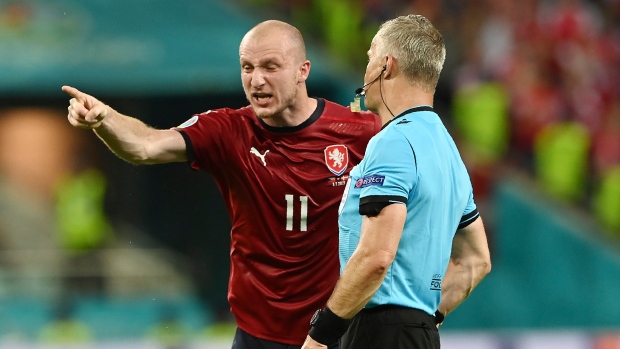 LONDON (AP) — Playing at the European Championship has been a very welcome feeling for England defender John Stones. Thanks, in part, to the refereeing.

While Premier League games are often punctuated by long pauses for drawn-out video review checks, that hasn’t been the case over the last month with refereeing overseen by UEFA at Euro 2020.

A higher threshold for intervening to potentially overturn on-field decisions cuts out pauses in games.

“They wanted everything to go quite swiftly and move and keep the game flowing,” Stones said Friday. “I’d like to see that maybe definitely coming to the Premier League next season if they can kind of, not speed the game, but keep it flowing a little bit more. That would be a good thing that’s probably come out of this tournament.”

So quick are some of the VAR checks that it might not seem one is even taking place.

In Sunday's final at Wembley Stadium, Dutch referee Björn Kuipers will oversee the match between England and Italy.

“We want the minimum interference for the maximum benefit and we want to intervene (only) for clear and obvious mistakes," UEFA chief refereeing officer Robert Rosetti said during the tournament.

“We need to find the correct balance in the line of intervention, because our target is to keep football like it is. It’s not acceptable to study all the minor pushing or pulling, or minor contacts and marginal contacts independently. The laws of the game are clear.”

Unlike competitions, including the Premier League, calls like offside aren’t being dissected on television forensically with dotted lines and detailed geometry.

“The time that is taken for the decisions has been really quick,” Stones said. “It seems that sometimes from our point of view, we want it to be kind of checked a little bit more.”

Not so on Wednesday, perhaps, when Raheem Sterling won the penalty that led to England’s winner against Denmark in the semifinals. Bursting into the penalty area in extra time, Sterling appeared to lose his balance following a challenge by Joakim Maehle. The winger eventually fell to the ground after a nudge from another Denmark player, Mathias Jensen.

“It was the correct decision,” Stones said. “He’s been bumped from two sides.”

It produced a European Championship record 16th penalty, which was saved but England captain Harry Kane scored from the rebound.

Italy midfielder Marco Verratti, however, thought England was fortunate to be awarded the spot kick that led to the 2-1 win.

“If I was the referee I wouldn’t have awarded a penalty,” Verratti said. “I think it was a bit of a generous penalty. But that’s part of soccer, it can happen. It was an important goal, because obviously they won the match, but it was a generous penalty.”