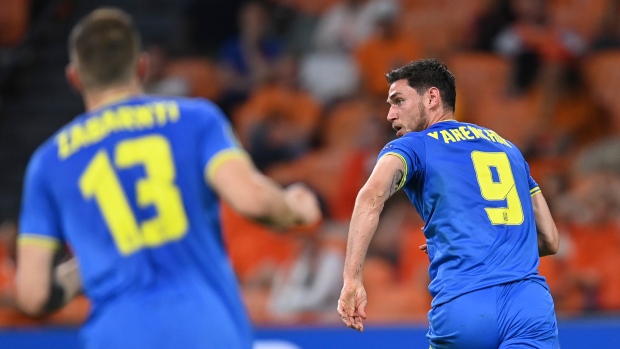 Both Ukraine and North Macedonia head into their Thursday meeting in Bucharest knowing that their Euro 2020 hopes are very much on the line, but there are reasons for both teams to stay positive ahead of this crucial match.

Coverage of Ukraine and North Macedonia begins at 8:30am ET/5:30am PT on TSN 1/3 and streaming on TSN.ca, the TSN App and TSN Direct.

Despite coming out 3-2 losers against the Netherlands on Sunday in a thoroughly entertaining contest, Ukraine showed heart and spirit, tying the match after falling behind 2-0 before conceding a later winner to Denzel Dumfries, and feel that the match could be built upon going forward.

"First of all, it was about the mentality,” Ukraine and Manchester City winger Oleksandr Zinchenko said. “But now it's important to focus on positive aspects. Our team showed character and we fought until the end, but unfortunately we didn't get what we wanted."

Manager Andriy Shevchenko says his team’s opening loss shows how quickly an ill-timed error can turn a match on its ear.

"The biggest lesson is that you have to play every small moment until the end,” the legendary former Milan striker said. “We were two goals down but we managed to level the score. However, we lost much-needed points. That showed us again the importance of being focused and avoiding mistakes."

Though there is a gulf in quality between the Dutch squad and what North Macedonia will offer, Shevchenko knows it would be folly for Ukraine to take their opponents lightly in Hungary.

"This is a team that deserves respect,” Shevchenko said of North Macedonia. “They have character, they have outstanding leaders and a well-established playing system. They almost always play 5-3-2 and like to counterattack. They are good fighters, as well. So we don't expect any gifts from them tomorrow."

Despite losing 3-1 to Austria in their opener, North Macedonia’s goals haven’t changed.

"We are going into this match intending to win, we have nothing to fear,” defender Stefan Ristovski said. “We've already made it to the competition and we are going for the victory."

North Macedonia gaffer Igor Angelovski concedes that this match has the potential to dictate the direction of Group C, but his team is prepared for that.

"We have to play at our very best – this is the Euro,” Angelovski said. “Only then can we earn a good result. We came to the Euro to reach the round of 16. Whoever wins this match will improve their chances to advance. We are not feeling any pressure, we are motivated, and we will play to win."

The history between these two countries is relatively light, having played only four previous matches, but Ukraine and North Macedonia were drawn into the same qualifying group for Euro 2016, playing a pair of matches in 2015, with Ukraine coming out on top in both. The last time out, Ukraine was a 2-0 winner in Skopje.