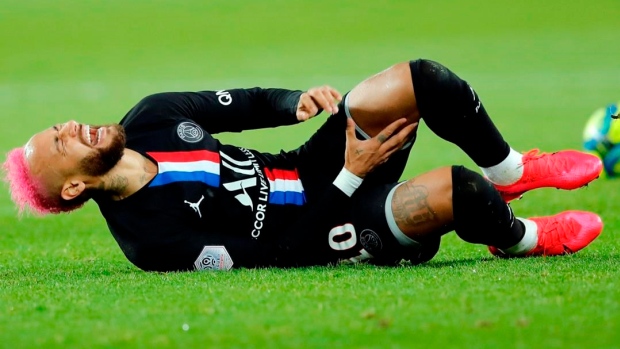 What to watch in the leading leagues in European soccer this weekend:

Neymar was unhappy after Tuesday's loss at Borussia Dortmund in the Champions League, taking a swipe at the club for over-protecting him. The star, who cost 222 million euros ($240 million), says they should have let him play earlier rather than making him sit out four games as he recovered from a rib injury.

PSG president Nasser al-Khelaifi was charged by Swiss federal prosecutors on Thursday in connection with a wider bribery investigation linked to FIFA and World Cup television rights. He maintains the charges have no “basis whatsoever, either in fact or law.”

PSG is 10 points clear of second-place Marseille, which is proving consistent under coach André Villas-Boas in his first season with the 1993 European champion.

Rennes has faltered recently and needs to get back to winning ways on Sunday at home to Nimes, which is in good form after clambering out of the relegation zone.

— By Jerome Pugmire in Paris.

After spending almost all season in the Premier League’s Champions League qualification spots, Chelsea could drop out of them completely this weekend.

Tottenham would overtake Chelsea and move into fourth place with a win at Stamford Bridge in a London derby on Saturday.

As a result of Manchester City receiving a two-year ban from European competitions by UEFA for breaching financial regulations, the team finishing fifth is now set to qualify for the Champions League, unless City wins an expected appeal at the Court of Arbitration for Sport.

Yet Chelsea would even drop out of the top five with a loss to Tottenham if sixth-place Sheffield United wins at home to Brighton.

Chelsea has only collected 15 points from its last 14 games.

In another standout match in the 27th round, second-place Manchester City visits third-place Leicester.

Liverpool, which holds a 22-point lead and requires a maximum of five more wins to clinch a first English league title in 30 years, is at home to West Ham on Monday.

After their Champions League wins in midweek, Dortmund and Leipzig have to keep up the pace in the Bundesliga title race.

Werder Bremen is the next team in Dortmund forward Erling Haaland's sights after his two goals gave Dortmund a victory over Paris Saint-Germain on Tuesday.

Haaland has 11 goals in seven games for Dortmund, which is third. Werder has lost its last four league games and nothing about its 3-0 capitulation to Leipzig last week suggests the Bremen club can withstand Dortmund's attacking power.

Leipzig is one point off Bayern at the top of the table. Striker Timo Werner ended a five-game scoreless streak with a penalty that secured a 1-0 win over Tottenham.

It's a good time for Leipzig to play Schalke on Saturday too — the Royal Blues may be sixth in the table but they've scored just one goal in four league games.

— By James Ellingworth in Düsseldorf, Germany.

Juventus and Napoli warm up at Spal and Brescia, respectively, ahead of Champions League last-16 games next week.

After a major drop in form that cost Carlo Ancelotti his job, Napoli has turned things around under Gennaro Gattuso and won five of its last six matches in all competitions.

Still only in ninth place, Napoli needs to keep on winning to secure a spot in Europe next season.

After visiting relegation-threatened Brescia and Mario Balotelli on Friday, Napoli hosts Barcelona on Tuesday in a first-leg match.

Juventus, which visits Lyon on Wednesday, holds a one-point lead over surprising Lazio in Serie A entering its game at last-place Spal on Saturday.

— By Andrew Dampf in Rome.

Real Madrid and Barcelona face modest Spanish league rivals this weekend before entering a key phase of the season.

Madrid leads Barcelona by one point atop the standings in Spain before it visits Levante on Saturday. Barcelona also hosts Eibar on the same day.

The two La Liga powerhouses will then start the knockout rounds of the Champions league before they square off against each other the following weekend in a “clásico” match.

Barcelona visits Napoli on Feb. 25 in the Champions League round of 16, a day before Madrid hosts Pep Guardiola’s Manchester City. Madrid then hosts Barcelona on March 1.

— By Joseph Wilson in Barcelona, Spain.