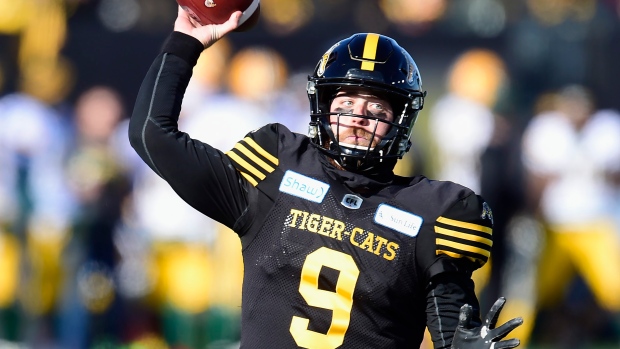 Nothing changes for Dane Evans, even now as the Hamilton Tiger-Cats' face of the franchise and clear-cut starting quarterback.

The 28-year-old American bypassed CFL free agency Wednesday to sign a two-year extension with Hamilton. Evans says his preparation and attention to detail will be just as diligent now as the Ticats' No. 1 quarterback as it was the past two seasons when he shared starting duties with veteran Jeremiah Masoli, who will now hit the open market Feb. 8.

"I'm just going to approach anything like a starter anyway, that's all I've always done," Evans said Friday during a videoconference. "Maybe the only year I didn't do that was my very first training camp when I was just trying to make the team.

"But ever since then, I've always seen myself as the starter so to me, nothing has changed except now everybody else sees me as the starter. I knew this day would come one day, I didn't know where. I'd hoped it would be Hamilton so I feel like I'm prepared for this."

The financial details weren't divulged but the expectation is Evans will make over $400,000 annually. However, Evans made it clear he left money on the table to help Hamilton re-sign players.

"I was realistic, I knew I'd earned X number of dollars but I didn't want to be the guy that takes it all," Evans said. "Then who do we have left? A bunch of rookies running around on league minimum that don't know.

"I definitely got paid very nicely, I'm very thankful for that. But I think we left some money on the table (so) if other guys want to come here, they can. I think we can build another championship team."

Evans made an impression in 2018 during his first training camp with Hamilton. The potential he showed forced Vernon Adams Jr., now Montreal's starter, to try cracking the roster as a receiver and also allowed the Ticats to trade former Heisman Trophy winner Johnny Manziel -- Evans's roommate on the road -- to Montreal once that season began.

Evans joined Hamilton in October 2017 after completing his college career at Tulsa, where he threw for 11,680 yards with 84 TDs and 47 interceptions in 46 career games.

Evans had originally planned to hit free agency before deciding his future, but had a change of heat once Hamilton tabled its offer.

"I truly did mean that," Evans said. "I guess I could've elaborated on it and meant I'm going to go wherever they get close to the value that I'm worth.

"I told my agent, I told my wife, I told my family all right away, 'If Hamilton hits that, I'm not going anywhere.' And sure enough Hamilton did, they wanted me here and I want to be here. For me, it was really easy once that decision was made."

While Masoli and Evans both competed for the No. 1 job, they were also friends. Evans said he spoke with Masoli on Wednesday and admits it will feel a little different this season not having Masoli in Hamilton's quarterback room.

"Every year I've been up here he's been the one guy I've consistently been with and talking to," Evans said. "It will be a little different but the one thing that's promised in life is change so we'll be find with that.

"Wherever he ends up, I'm sure we'll still text and call and all that. I don't see why we wouldn't."

The six-foot-one, 218-pound Evans, has also run 66 times for 309 yards and six TDs while leading Hamilton to consecutive Grey Cup appearances, both losses to Winnipeg.

Evans relieved Masoli in the '21 East Division final. He finished 16-of-16 passing for 249 yards and a touchdown while rushing for fourth-quarter TDs to rally Hamilton to a 27-19 road win over the Toronto Argonauts.

That earned Evans the Grey Cup start against Winnipeg. But he left in the second quarter with a neck injury having completed four-of-nine passes for 21 yards.

Masoli took over and led Hamilton to a 22-10, fourth-quarter lead but the Ticats needed Michael Domagala's 13-yard field goal into a stiff wind at 19:54 to force overtime. After Zach Collaros's 13-yard TD strike to Darvin Adams and two-point conversion to Rasheed Bailey put the Bombers ahead 33-25, Kyries Wilson cemented the victory by intercepting Masoli on the Ticats' possession.

"That (Grey Cup win) is all we talk about around here," Evans said. "That's how we measure success, at least in my mind and especially at the quarterback position.

"I could care less about any of my stats, if we run it 50 times or throw it 50 times. I just want to win and ultimately win that Grey Cup and do it the next year and the year after that . . . but you have to do one at a time."

This report by The Canadian Press was first published Jan. 14, 2022.