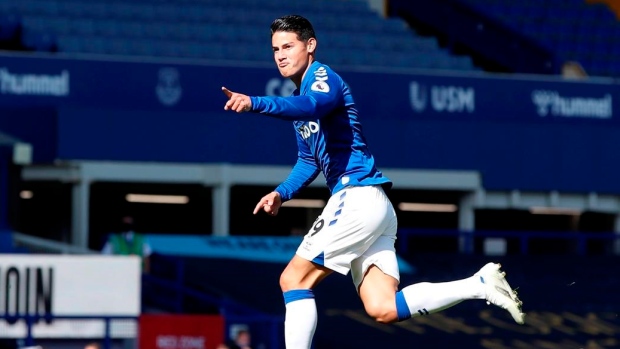 It was Everton’s second straight win to open the season — Carlo Ancelotti’s side also beat Tottenham last weekend — and it looks a team transformed with Rodriguez in the playmaker role following his off-season move from Real Madrid.

The Colombia star scored from outside the area to make it 2-1 just before halftime and was then involved in the game's key incident moments later, when he was shoved in the face by Kieran Gibbs to earn the West Brom left back a red card.

Bilic was also sent off for protesting against the decision to referee Mike Dean as the teams went off at halftime.

Everton took advantage of its numerical advantage after the break as Calvert-Lewin added two more goals to his initial equalizer to complete his hat trick, with Rodriguez whipping over a corner to set up the striker’s third goal. Calvert-Lewin already has four goals this season, having grabbed the winner at Spurs.

Centre back Michael Keane also scored for Everton in the second half.

West Brom has lost back-to-back games, conceding eight goals in the process, having been beaten 3-0 by Leicester at home last weekend.

Grady Diangana put West Brom in front in the 10th minute after being allowed to run half the length of the field and shoot into the bottom corner from 25 yards (meters).

Matheus Pereira scored the visitors’ other goal, curling in a free kick to make it 2-2 in the 47th.