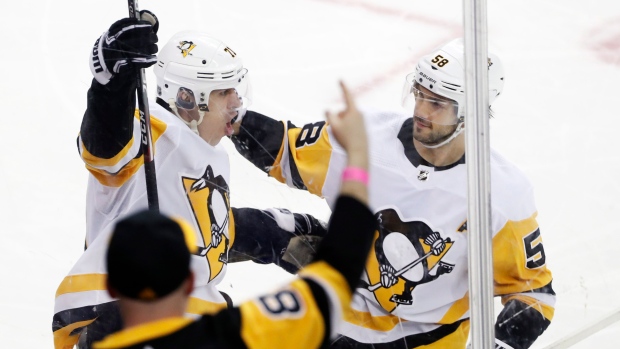 NEWARK, N.J. — Evgeni Malkin scored two goals and set up another to lead the slumping Pittsburgh Penguins to a 5-2 victory over the New Jersey Devils on Tuesday night.

Evan Rodrigues and defencemen Justin Schultz and Kris Letang also scored as the Penguins won for only the third time in 11 games. Matt Murray made 20 saves to help Pittsburgh reach 40 wins for the seventh straight season and 13th time since 2006-07. The only exception was the 48-game lockout-shortened season in 2012-13.

“I thought that was one of the better games that we played, one of the more complete games we played in a while,” Penguins coach Mike Sullivan said. "I thought all four lines were going, I thought the defencemen competed out there. I thought we were playing the game the right way. I thought our leaders set the example and Geno I thought had a great game.”

Nikita Gusev and Miles Wood scored for New Jersey, which won its previous two games. Mackenzie Blackwood stopped 28 shots but the last-place Devils dropped to 6-3-2 in their last 11.

“I didn’t see the same energy," Devils interim coach Alain Nasreddine said. “Some of it for sure, you look at who you are playing against. They played well. I thought we had a good first, good first 10. Then it kind of went down a bit and we never got anything back in the second and third.”

The big sequence for the Penguins was killing off a 5-on-3 power play early in the third period while clinging to a 2-1 lead.

“We knew we had to bear down. We knew we would have to block a couple shots and I thought everyone went out there and stepped it up,” said forward Bryan Rust, who had a big blocked shot during the penalty kill.

After Murray stopped Kyle Palmieri on a point-blank chance during the kill, Malkin, who had set up Schultz's go-ahead goal in the second period, took over and scored his 24th and 25th goals of the season.

Malkin powered through Blackwood at 7:11 for a 3-1 lead. After Wood closed the Devils' deficit to one goal at 10:24, Malkin scored off a turnover less than three minutes later.

“They are good team. They are up there in the standings for a good reason,” Nasreddine said. "Their big players show up in big games. When it is not (Sidney) Crosby, it is Malkin. When it is not Malkin, it’s Letang. When it's not Letang, it’s (Tristan) Jarry or Murray. Tonight it was Malkin. I am not surprised at all.”

Letang scored into an empty net to ice the game.

Rodrigues, acquired from Buffalo on Feb. 24, scored his first goal for the Penguins with a shot from the left-side boards that deflected off the leg of Devils defenceman Matt Tennyson past Blackwood.

Gusev tied the game on a power play with 7:14 left in the period. Murray got his glove on the shot but could not prevent it from going in.

NOTES: The Penguins had not allowed a power-play goal in their last four games. ... The game was the third of 10 straight for Pittsburgh against Metropolitan Division teams. ... F Janne Kuokkanen, acquired in a trade with Carolina last month, played for the Devils for the first time. ... Sam Laffety was back in the Pittsburgh lineup with Nick Bjugstad out because of a lower-body injury. Schultz broke a 27-game goal drought with his third of the season.

Penguins: At Columbus on Thursday night, the second stop on a three-game trip.