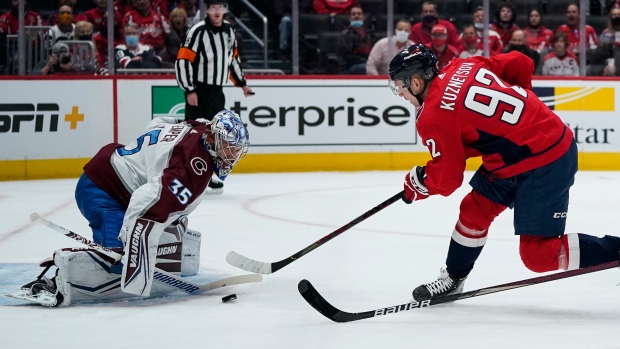 WASHINGTON (AP) — Evgeny Kuznetsov skated to the bench after a turnover cost the Washington Capitals a goal against and wanted to slink into the ground.

None of his coaches or teammates said a thing, but it took until he scored his second goal of the game on the way to the Capitals beating the Colorado Avalanche 6-3 Tuesday night that Kuznetsov finally felt better. He was the most noticeable player on the ice, finishing with three points after an assist on Alex Ovechkin's empty-netter for career goal No. 734 and looking like the player Washington needs him to be.

Kuznetsov dazzled from his first shift on, skating around defenders with ease and showing off the talent that made him the Capitals’ leading scorer on their 2018 Stanley Cup run. It was only fitting he brought back his flapping wings bird celebration on a night that he showed the best he could offer.

Especially without top center Nicklas Backstrom for at least their first 10 games, the Capitals will take every bit of the good and bad of Kuznetsov if he produces like this. And it could have been even more because teammates kept trying to set Kuznetsov up for the hat trick in the third period, but that's the last thing he wanted.

“We need more,” Dowd said. "A goal every game would be perfect.”

Nick Jensen, Anthony Mantha and Dowd also scored for the Capitals before Ovechkin sent the puck into an empty net from 143 feet to continue his quest for the career goals record. Mantha's goal was the 100th of his career and ended a 17-game drought counting the playoffs and the end of last season.

The Capitals spoiled Avalanche star Nathan MacKinnon's first game of the season after he missed the past week in NHL COVID protocol. MacKinnon, fellow top-line forward Mikko Rantanen and Norris Trophy finalist Cale Makar were each on the ice for four goals against.

Coach Jared Bednar called it a “bad night” for some of his top players.

“I thought we got outcompeted in a lot of areas, so we gave up way too much," Bednar said. “I just thought they were the faster, bigger, stronger and hungrier team tonight, start to finish.”

J.T. Compher scored short-handed, Darren Helm at even strength and Rantanen on a late power play for Colorado. Goaltender Darcy Kuemper allowed five goals on 38 shots but was hung out to dry by his teammates in a game that was a defensive adventure at times.

Capitals: Play their first road game of the season Thursday at the New Jersey Devils.