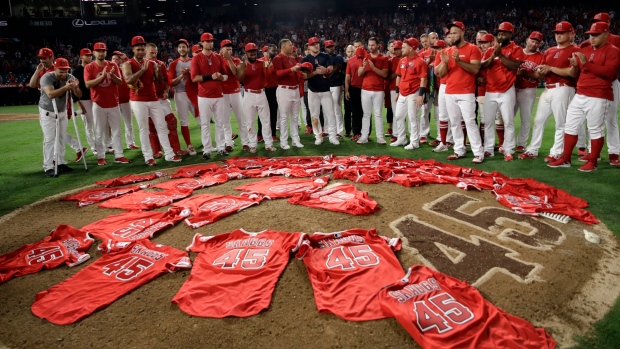 Eric Prescott Kay was arrested in Fort Worth, Texas, and made his first appearance Friday in federal court, according to Erin Nealy Cox, the U.S. attorney for the Northern District of Texas.

Kay was the Angels' director of communications, and he served as their public relations contact on many road trips. He was placed on leave shortly after Skaggs' death, and he never returned to the team.

In a statement issued Friday after news of Kay's court appearance, the Angels said they opened an independent investigation into Skaggs' death. The team reaffirmed its position that management didn't know Skaggs was an opioids user and didn't know any employees were providing drugs to players.

Skaggs was found dead in his hotel room in the Dallas area on July 1, 2019, before the start of what was supposed to be a four-game series against the Texas Rangers. The first game was postponed, and Skaggs' death provoked an outpouring of grief across baseball.

Skaggs died after choking on his vomit with a toxic mix of alcohol and the powerful painkillers fentanyl and oxycodone in his system, a coroner's report said. Prosecutors accused Kay of providing the fentanyl to Skaggs and others, who were not named.

“Tyler Skaggs’s overdose – coming, as it did, in the midst of an ascendant baseball career – should be a wake-up call: No one is immune from this deadly drug, whether sold as a powder or hidden inside an innocuous-looking tablet,” Nealy Cox said.

If convicted, Kay faces up to 20 years in prison. Federal court records do not list an attorney representing him, and an attorney who previously spoke on his behalf did not immediately return a message seeking comment.

According to the criminal complaint filed in the case, Kay had “a history of narcotic transactions, including several transactions wherein Kay acquired oxycodone pills for (Skaggs) and others."

The Angels' statement said the team has "fully co-operated with law enforcement and Major League Baseball. Additionally, in order to comprehensively understand the circumstances that led to his death, we hired a former federal prosecutor to conduct an independent investigation.

"We learned that there was unacceptable behaviour inconsistent with our code of conduct, and we took steps to address it. Our investigation also confirmed that no one in management was aware, or informed, of any employee providing opioids to any player, nor that Tyler was using opioids."

The current Angels are in Texas for a three-game series against the Rangers this weekend, and new manager Joe Maddon said Friday night that he hadn't been involved in the team's investigation. Maddon, who became the Angels' skipper in October 2019, feels confident about the current state of the Angels' clubhouse.

“I don’t recognize any kind of issues right now,” Maddon said. “I have not really been contacted or informed of any other kind of behaviour going on. So for right now, I want to believe we’re going in the right direction.”

Maddon was a major league coach for the Angels from 1994 until 2005, when he became Tampa Bay's manager. He was friendly with Kay during his first stint in Anaheim.

“I did know him well at that time,” Maddon said. “I had not been around him for a long time. Of course, this entire scenario is difficult for anybody to comprehend or wrap your mind around it. It’s a societal problem that we’re going through right now. It wasn’t just indigenous to the Angels.”

Skaggs, who was well-liked in the Angels' clubhouse for his outgoing personality and supportive nature, died 12 days before his 28th birthday. The Santa Monica native was drafted by the Angels in 2009 and later traded to Arizona, where he played his first two major league seasons before returning to the Angels in another trade in late 2013.

“The family is deeply heartbroken to learn that Tyler would be alive today were it not for a pill containing fentanyl that was provided by the Director of Communications of the Angels," Hardin said. "We note that the Angels say they commissioned an independent investigation that concluded no one in management was aware that a team employee was supplying illegal drugs to Tyler. We encourage the Angels to make that report public.

“We are relieved that no one else who was supplied drugs by this Angels executive met the same fate as Tyler. While nothing will replace the loss of Tyler, we are very grateful to federal prosecutors for their diligent and ongoing work.”