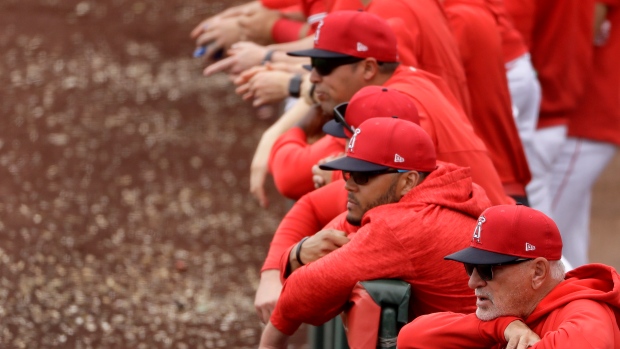 A former Los Angeles Angels employee filed an opposition on Thursday to a legal motion by the team and Major League Baseball for trying to dismiss a defamation complaint after he was fired last March.

According to court documents obtained from the Los Angeles Times, Brian "Bubba" Harkins, the Angels' visiting clubhouse manager who allegedly aided opposing pitchers in obtaining illegal substances to put on baseballs, said many Angels pitchers used his substance, which included rosin and pine tar, before being dismissed for giving the concoction to visiting pitchers.

"Hey Bubba, it's Gerrit Cole, I was wondering if you could help me out with this sticky situation," the Yankees pitcher texted Harkins in 2019, according to the documents. "We don't see you until May, but we have some road games in April that are in cold-weather places.

"The stuff I had last year seizes up when it gets cold."

Court documents obtained by the Houston Chronicle added that Verlander told Harkins in a phone call that "the league has let this go on for 100 years," and claimed MLB began cracking down on pitchers using doctored substances after it learned teams were hiring chemists and conducting studies to find better ways to increase spin rate.

Harkins was fired last March while the Angels were in Arizona for spring training, after working at Angel Stadium for most of the past four decades. He filed the defamation complaint on Aug. 28 and the Angels and MLB filed a motion to dismiss the lawsuit on Nov. 2.

Major League Baseball cracked down last spring on the use of pine tar and other substances pitchers use to get a better grip on the ball. Such practices, including a popular concoction from sunscreen and resin, have technically been outlawed for years, but those rules had been enforced sparingly.

Harkins started out as a batboy with the Angels. He eventually became a clubhouse attendant in the 1980s and worked in the visitors' clubhouse since 1990.