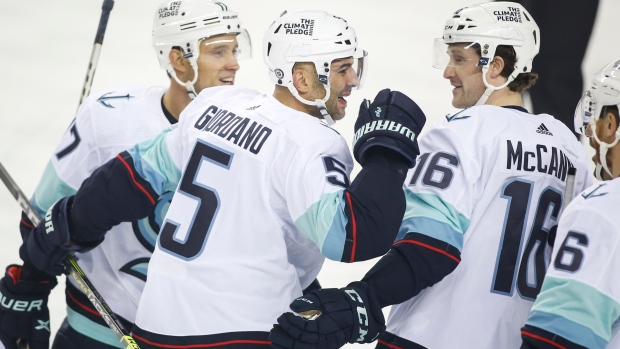 As far as first returns to old haunts go, this one was close to perfect for Mark Giordano – even if it was in a meaningless 4-3 preseason shootout victory for him and his new team.

If there was any doubt in Giordano’s mind as to how fans in Calgary – his home for 15 seasons as a member and captain of the Flames – felt about him, it was quelled a handful of seconds into the game when the Seattle Kraken blueliner gathered the puck following the opening faceoff win.

As he took possession, Giordano was serenaded with cheers and applause from the Saddledome faithful. A couple of minutes later, the 37-year-old pinched in off the rush and backhanded a shot past Flames goalie Dan Vladar to open the scoring for the Kraken – a familiar sight to Flames fans, but with Giordano in unfamiliar colours. Cheers and familiar chants of “Gio” then echoed throughout the building.

“It was awesome,” Kraken forward Jaden Schwartz, who scored twice and added an assist, said afterwards. “Even their fans were cheering a little bit. Our bench was excited…super happy for him.”

Giordano finished the game having played just over 22 minutes, second most for the Kraken, and his three blocked shots were a team high. He admitted to feeling weird about entering the Saddledome as a member of the visiting team. He wanted to get the initial visit to Calgary out of the way early into his tenure with Seattle, as opposed to the Kraken’s first regular-season game in the city on Dec. 23 that would have an impact in the standings.

“We’ve got to get familiar with each other and play games,” Giordano said of his new teammates.

“I’m actually glad to get one under my belt here early in my time in Seattle here.”

While Giordano, who won the Norris Trophy with the Flames in 2019, is now a Flames opponent, the impact he had on his former club remains intact.

“I think he was the perfect example for me on the ice and off the ice,” Flames blueliner Juuso Valimaki said. “Just to see what he does everyday, I think he’s a true, true professional.”

Longtime teammate Mikael Backlund, who played 12 seasons with Giordano, said that he and Giordano joked about never getting to play against one another when they were both in Calgary.

“He always said, ‘Imagine if we played against each other, I’ll beat you,’ and all that stuff,” Backlund said.

Jordan Eberle, Giordano’s new teammate with the Kraken, lives in Calgary in the off-season and has seen his impact on the ice and beyond.

“The presence that he has throughout the city, the community work that he does, the charity work, just his face around the community, he does a lot,” Eberle said.

“It was awesome seeing him get the first goal…he’s the epitome of being a leader and a captain.”

Of course, the caveat with Wednesday’s return is that it is the preseason.

Giordano has mentioned several times that his true return to Calgary will be that game in December when the Kraken visit to play a game that actually counts in the standings. There will be a full house, video tribute, and ceremony fit for a franchise icon – and two points on the line in the Pacific Division.

“The regular season one, I’m sure it’ll be a full building,” Giordano said.

“It was nice to see him get the “Gio” chants,” Milan Lucic said of the evening.

“But I think it’ll go up a notch on December 23 when he has his real comeback to Calgary.”