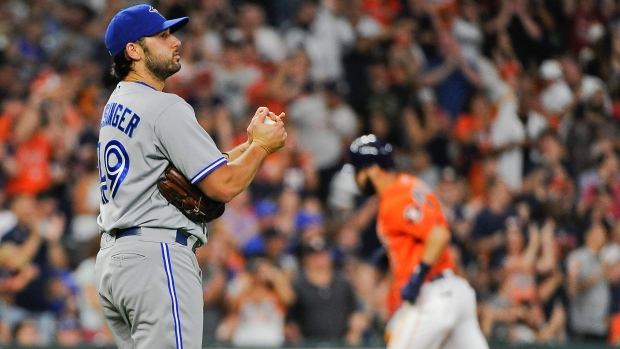 The fallout from the Houston Astros' sign-stealing operation in 2017 continues to grow.

Bolsinger, who appeared in 11 games with the Jays in 2017, is suing for unspecified damages, but he is partially calling for the $31 million in bonuses awarded to the Astros for winning the World Series to be donated to Los Angeles-area charities (the Astros defeated the Dodgers to win the World Series), as well as to set up a financial assistance fund for retired players having difficulty making ends meet.

“There’s a message to be sent to youth out there," Bolsinger, 32, told USA Today's Nancy Armour. "Especially athletes, more specifically baseball players. It was awesome to (grow up and) watch game played the right way. We’ve kind of drifted from that. It’s something we can really express to these kids: You don’t have to cheat to get to where you want to go. This kind of stuff doesn’t need to happen.”

Bolsinger believes he was personally victimized by the Astros' operation.

On August 4, 2017 in a game at Minute Maid Park with the Blue Jays, Bolsinger lasted one one-third of an inning, surrendering four runs on four hits and three walks over just 29 pitches.

“I don’t know if I’ve had a worse outing in my professional career,” Bolsinger said of the appearance. “I remember saying, 'It was like they knew what I was throwing. They’re laying off pitches they weren’t laying off before. It’s like they knew what was coming.’ That was the thought in my head. I felt like I didn’t have a chance.”

According to Tony Adams, an Astros fan who compiled a database of the Astros' home games that had video to identifying trash can-banging, the August 4 game against the Jays featured the highest usage of banging at 54 times. The lawsuit claims that there were bangs on 12 of Bolsinger's 29 pitches.

The game would end up being Bolsinger's final MLB appearance, designated for assignment following the game. Unable to catch on with any other team, Bolsinger signed in Japan for 2018, where he also played in 2019.

Currently, Bolsinger is without a contract.

“I don’t think the punishment has fit the crime,” he said of the discipline meted out to the Astros last month that included one-year suspensions to the since-fired AJ Hinch and Jeff Luhnow, as well as a $5 million fine and surrender of four draft picks. “And let’s be honest, all these guys are going to get managing jobs again. … Guys like us that were cheated? I don’t have a job. I’m not playing.”