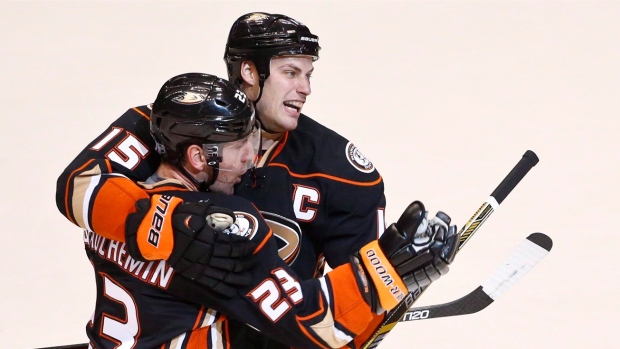 Have we been looking at on-ice shooting percentage the wrong way?

The statistical community has recently embraced the power of this metric, which captures the 5-on-5 conversion rate of the team with a specific player on the ice. Just probably not in the way you think. (Side note: for a fantastic explainer, check out Sean McIndoe's piece at Grantland.)

For a long time, I have subscribed to the following school of thought: On-ice shooting percentage is an excellent descriptor of what's occurred in the past, but a poor predictor of what will occur in the future. That's because on-ice shooting percentage for all skaters, even across multiple years of performance, regresses heavily to the league average. Simply applying the laws of regression towards the league average (around 7.5%) made the blogosphere a fairly successful and credible outpost for forecasting future player performance.

The question I routinely get about on-ice shooting percentage is why, exactly, it's not a repeatable skill. Unfortunately there's not a single smoking-gun answer, but you can probably point to any of the following: teammate quality, opponent quality, team pace/tempo, and perhaps most importantly of all, the quite random nature in which goals are scored in today's NHL. If you don't subscribe to the latter, I ask that you watch a dozen or so games and count how many pucks are inadvertently ricocheted/deflected into the net after an offensive zone sequence.

At any rate, these variables change month to month, let alone season to season. And again, the data's pretty clear here after the above-referenced three-year test: league-wide, you're better off regressing a player's on-ice shooting percentage 67% towards the league average if you want to guess what he'll do going forward. (Tulsky offers the example of an 11% on-ice shooter in the first three years likely being a 9.2% on-ice shooter over the next three years, almost exactly 67% closer to our league average 7.5%.) Not every guess will be precise, but just applying the laws of regression will have you on the right side of the argument more times than not. 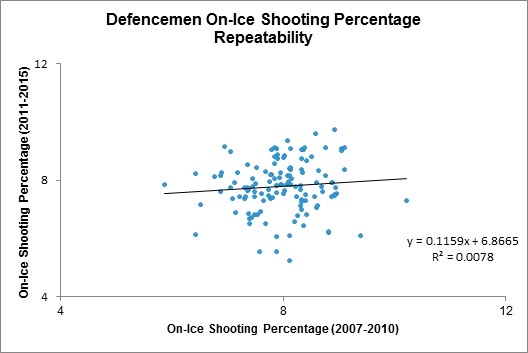 This is an interesting finding in the sense that it says defencemen have almost zero say when it comes to conversion rates. Strong puck-movers like Mike Green, Brian Campbell, and Zdeno Chara have all seen their on-ice shooting percentages crater in the 2011-2015 window; guys like Kris Russell and Francois Beauchemin, on the other hand, have seen their on-ice shooting percentages explode in recent years.

Long story short: if you have a defenceman's multi-year on-ice shooting percentage handy, you can pretty much throw it away as it pertains to predictive value. You'll gain nothing from knowing the defenceman's on-ice conversion rate other than explaining what's already occurred.

Now, to the wingers. Is high (or low) on-ice shooting percentage a repeatable skill here? 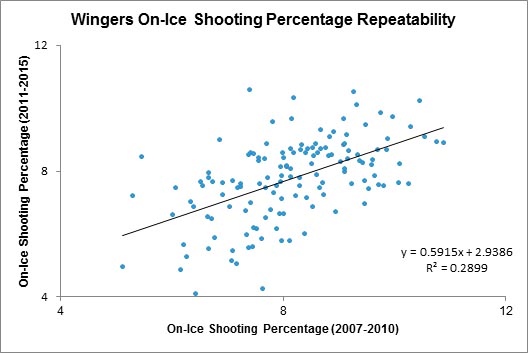 So, there's something of a relationship here, albeit a weak one – you'll notice player performance from 2007-2010 and 2011-2015 are tied closer together, indicating that wingers might have a slice of control over their on-ice shooting percentages. Still, there's not a whole lot here, and we'll see pretty considerable variation over time.

It seems surprising that wingers – who, again, are often considered the pure 'goal scorers' of hockey – don't have much control over how they and their teammates convert on shots on goal. But, the data's pretty clear. My best guess (outside of randomness, which, again, is at play here) is that the pure goal-scorer can really only have control over his individual conversion rates, with far less of an effect on how his teammates produce.

That brings us to centres – players who chip in on goal-scoring and act as the key distributors and playmakers of the team. It would seem to me that if we are going to see any sustainability or repeatability in high (or low!) on-ice shooting percentages, it would manifest here. 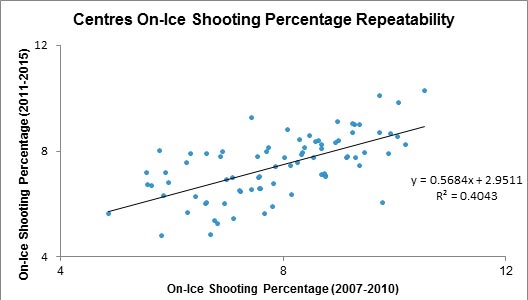 A few concluding thoughts, in no particular order.

One, regression is still paramount. Anyone with even a casual interest in estimating future success (or failure) must lend credence to the fact that "the laws of arithmetic apply to hockey" – just as Eric Tulsky, now of the Carolina Hurricanes, argued years and years ago.

Two, a caveat to one: It doesn't appear as those each position should be treated equally. Defencemen have virtually zero control on whether or not his teammates convert at a high or low rate. Wingers have little. Centres have a little more. Regression is inevitable for all three positions, but the degree to which we should regress each player may differ from previously thought.

Three, and finally, I think it's a fascinating look at how general managers in today's NHL may operate in terms of player signings, the trade market, etc. Even in today's 'stats era', you could become an awfully sensible organization by simply flipping defencemen with high on-ice shooting percentages for assets with actually repeatable long-term skills.