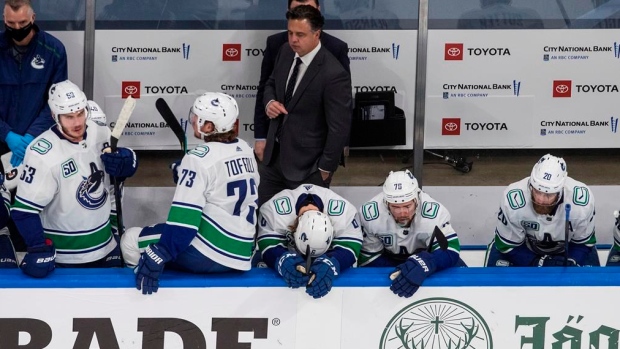 Whether you are the defending Stanley Cup champions or coming off a futile 17-win regular season, the off-season is critical for post mortems.

What went well? What can be improved upon? And for those targeted areas of improvement, are there structural or deployment decisions that can be addressed by players and coaches, or a personnel issue that needs to be resolved by the front office?

Teams know, generally speaking, where they need to progress. The Dallas Stars know they need more than 116 goals (30th) at even strength next season. D.J. Smith’s Ottawa Senators have to generate more offence from dangerous areas on the power play, where they converted on just 14 per cent of opportunities. The Washington Capitals will be trying to avoid a repeat of a league leading 266 minor penalties. And on and on you can go.

As teams find these inefficiencies, they will start combing through the data and video to understand why certain breakdowns continued to happen.

Consider Travis Green’s Vancouver Canucks for a moment. A young and upstart team with talent across the lineup, Green’s team made substantial strides in most areas during the 2019-20 regular season. And yet the team was out-scored at even strength, thanks in large part to giving up 152 goals (21st). Goaltending can’t be blamed here: the Canucks stopped 91.8 per cent of even strength shots with Jakob Markstrom and Thatcher Demko turning in fantastic seasons.

This sort of data certainly indicates a problem, but it doesn’t quite capture how these goal-scoring opportunities manifested themselves in the first place. Did an attacking Vancouver shooter take an ill-advised shot from distance? Was Vancouver’s blue-line too deep inside of the offensive zone? Were Vancouver’s forwards too slow on the recovering backcheck?

Let’s look at a few examples – first to validate the data, then to understand how some of these plays broke down. We can start on opening night of the 2019-20 regular season, where the Canucks gave up a counter-attacking goal to Edmonton’s Zack Kassian in the third period: 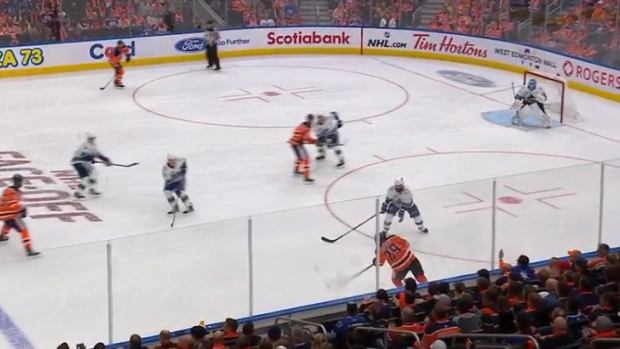 Right before the video cuts in, Vancouver’s Tanner Pearson takes a wide angle shot at the net, putting the puck right in the middle of some serious traffic. The video picks up after the Oilers collect the puck, and you can see that the wide angle shot and quick recovery by Edmonton puts Vancouver in a bit of a pressure cooker to make a clean change. The Canucks are able to get four defenders level with the attacking Leon Draisaitl, but all four overcommit spatially to the puck. That opens up an easy passing lane for Draisaitl to find Kassian, who would end up tying the game.

Let’s look at a more recent example: a March 6th game against the lightning-quick Colorado Avalanche. 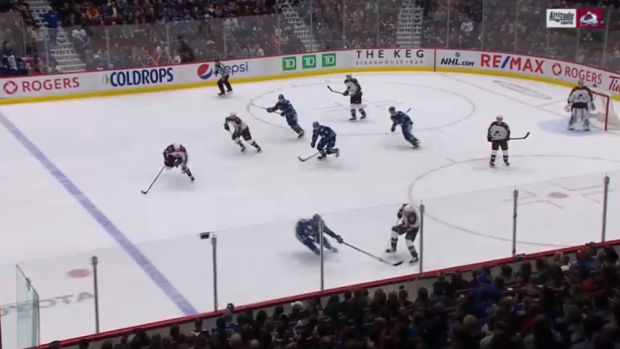 This is an interesting one. Moments before Valeri Nichushkin’s counter-attacking goal, Vancouver forward Adam Gaudette had missed high against goaltender Pavel Francouz, putting the puck out of play and setting up an offensive zone face-off. The Canucks would lose the draw - it happens! - and the breakdown starts with defenceman Tyler Myers’ failed attempt at attacking the puck carrier in Matt Nieto. Not only does he not win the puck battle, he takes himself completely out of the play, setting up a two-on-one counter-attacking opportunity for Nichushkin and Pierre-Edouard Bellemare.

This is another example of where a defensive breakdown can happen quite far from the net - in this case, Myers took himself out of the play 150-feet from his own net, and the Vancouver forwards never could catch up to take the passing option (Bellemare) out of the play.

You do not want to slow down a speedy team’s aggression - the top of the Canucks lineup, headlined by stars in forward Elias Pettersson and defenceman Quinn Hughes, are the exact pieces you want to play an uptempo style of hockey.

But aggression can be a double edged sword. The best teams know how to harness it and have structure in place to recover when things break down. Other teams, especially young teams like Vancouver, can get caught trading scoring opportunities from time-to-time.

For the Canucks next season, it’s imperative they keep their foot on the gas, especially when their young guns are on the ice. But mitigating the defensive risk this style of play opens up will be crucial in cutting down the goals against number - especially in a hypothetical All-Canadian division ripe with elite scorers who thrive off rush opportunities.