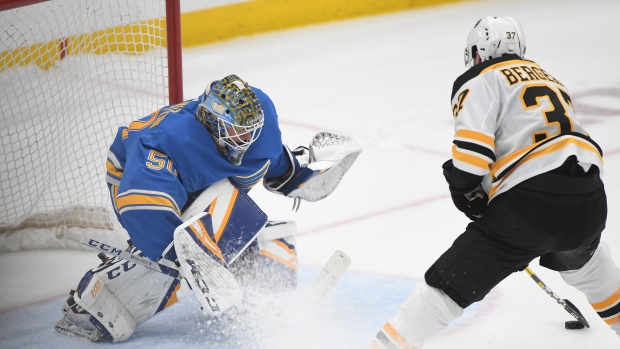 If there is one thing we can expect during this Stanley Cup final, it’s that goals will be at a premium.

The Boston Bruins and St. Louis Blues were two of the more well-rounded teams during the 2018-19 season and it’s hard to find a fatal flaw across either of the respective lineups.

Boston has been dominant all season long, and St. Louis’ surge over the second half of the season has been well documented. Even during what most believed to be a chaotic postseason, two of the three best teams over the second half of the regular season (both just behind Tampa Bay) are playing in the final. All we saw was the regular season performance continue through the first three rounds of the playoffs.

These two teams, by and large, are mirror images of one another. They are puck-dominant teams with high-end talent at the top of the lineup and goaltenders who have been on fire for an extended period.

But the strongest shared trait between the two teams is how defensively oppressive they can be. All things being equal, teams have struggled all season to generate dangerous offence against the Bruins and Blues, and that’s largely because of how structurally sound and capable they are in front of Tuukka Rask and Jordan Binnington, respectively.

Let’s focus primarily on 5-on-5 for a moment. If we look at the full regular season so as not to omit any data (particularly when St. Louis was struggling to pick up wins in the standings), the numbers are impressive. Consider three of the common measures of defensive performance in shots against, scoring chances against and goals against for a moment: 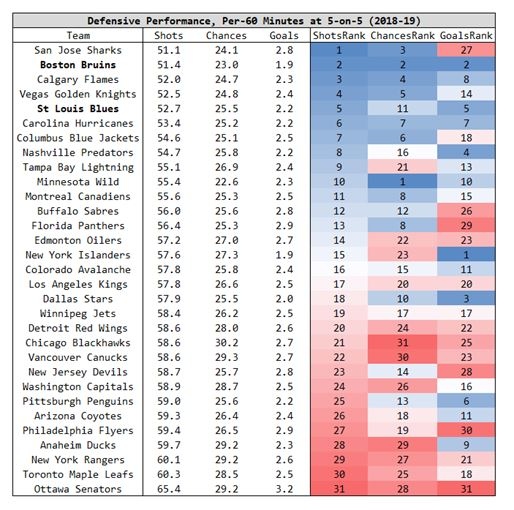 These are three of the most common components of what makes a team defensively successful, and you can see that the Bruins and Blues have both been considerably better than their peers have across all three categories.

There is one caveat with the goals against data, though – it’s quite reliant on goaltending performance and as such, really good goaltenders (and bad goaltenders) can heavily bias a team’s performance. It’s why we see a team like San Jose post seemingly great defensive numbers despite the gory goals against numbers. There, the story was really about Martin Jones and Aaron Dell’s struggles – certainly more so than the 18-player skater group in front of them.

To that end, I prefer to use expected goals models to measure defensive performance. Expected goals against control for goaltender effects and allow us to see what a team really does look like in terms of neutralizing opponent attacking sequences, pushing teams out to the perimeter, and so on. This is especially true considering how well Rask and Binnington have played for their teams this year. They have been great – Rask is my Conn Smythe favourite, and it’s not close – but they’ve also benefited from the skating group they play behind.

Let’s trend out expected goal rates, again at 5-on-5, over the course of both the regular season and playoffs. I have plotted both Boston and St. Louis on 10-game rolling averages, along with what we consider “baseline” or average performance for the league.

There are a few points here. The defence has been stifling in front of the goaltenders, and they’re doing it through a combination of strong structural play in the defensive zone and sustained offensive zone puck control. Those have been consistent themes all season long. 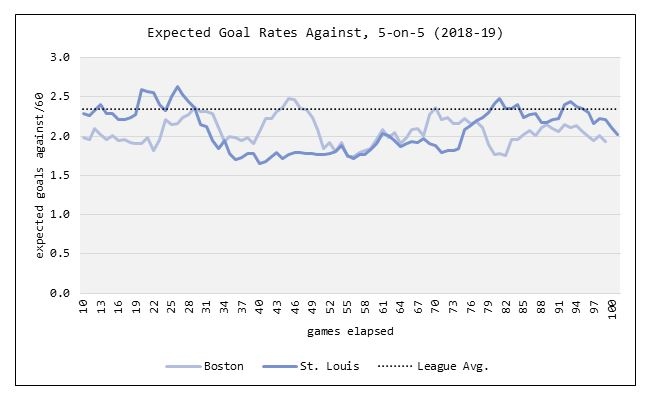 Outside of an early stretch of games for St. Louis back in October and some early December struggles for Boston, these two teams have been relentless and stifling in their defensive play. They harangue puck carriers through the neutral zone and force teams to try and dump the puck in and recover accordingly. They substantially limit counterattacking opportunities that lead to dangerous shots off the rush and, often times, multi-shot shifts from rebounds and traffic.

When they do have to get five behind the puck and setup defensively, they protect the interior of the defence where dangerous slot shots can manifest. Most importantly, they make very few mistakes when they have the opportunity to exit the zone.

They are all small components in the grand scheme of it all but that’s largely how you end up with such impressive defensive performance for 100 or so games. Combine it with the talent of goalies like Binnington and Rask and what you end up with are two teams that are impressively difficult to score on.

These are two great teams. But my suspicion is that their defensive capabilities will overwhelm the offensive talent that also exists in this series, creating a series of low-scoring games.

If that theory holds true, the high-scoring theme of the 2018-19 regular season will die a quick death during the Stanley Cup final.