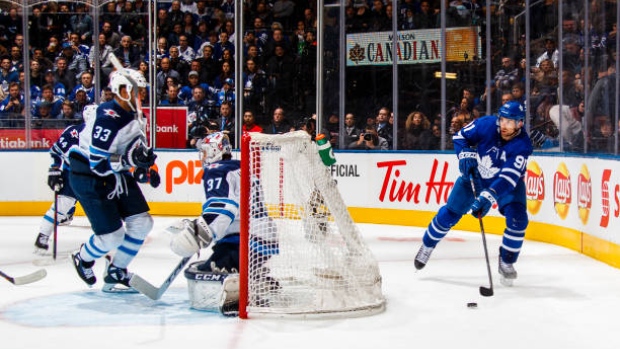 Don’t look now, but it appears there will be a distinct Canadian flavour for the 2018-19 Stanley Cup playoffs.

The last decade of hockey has been a relatively dark one for Canadian NHL franchises. Most of the bigger market teams have gone through lengthy rebuilding periods and, outside of a brief Vancouver stretch years ago, no team has really consistently carried Stanley Cup expectations.

Even for the teams who have been able to succeed in the regular season, playoff success has been hard to come by. The only Canadian Stanley Cup appearance in the last decade was from the 2011 Vancouver Canucks. The last Stanley Cup winner, of course, would be the 1993 Montreal Canadiens.

It was inevitably going to rebound, and that rebound appears to be upon us.

Past the Christmas break, every Canadian team except the Ottawa Senators is legitimately in a playoff race. Three teams have more or less etched their name into the bracket, though it won’t be official until April. Those teams are the Toronto Maple Leafs (52 points in 37 games), Calgary Flames (47 points in 37 games), and Winnipeg Jets (50 points in 36 games).

Having three teams as virtual shoe-ins for a playoff bid at this point in the season is quite the feat, mostly because it heightens the chance of one of these teams going on a deep run. It’s one thing to get a majority of the Canadian franchises into the playoffs. It’s another if you do that and have a handful of hockey clubs that legitimately can win a few playoff series in the process.

There are different ways to calculate the probability of reaching the postseason, but these different techniques generally yield very similar results. Monte Carlo simulations are mathematically appropriate because they give us clear probability distributions by iterating the rest of the 2018-19 regular season thousands upon thousands of times.

Within the simulations, we can use different criteria to test outcomes. We can simply flip a coin on every game and assume all teams are of equivalent talent. Or we can simulate weighted coin flips that give more talented teams a better chance of winning future games. Those weights can be based on any number of predictor variables (like using past goal scoring to forecast future goal scoring, or past shot advantage rates to forecast future goal scoring, or any other number of examples).

To illustrate the point about how reasonably clustered these forecasts tend to be, let’s take a look at three different models in the public sphere. The first is SportsClubStats, which uses a simple weighted coin flip. The second is MoneyPuck, which uses a more complex prediction model. The third is HockeyViz, which is another attempt at a comparably complex game-by-game prediction model.

At any rate, here were the playoff odds from each of the above sources heading into the Christmas break:

We aren’t halfway through the regular season yet, but most teams (outside of Montreal) have a reasonably similar forecast. All three models love the chances of Toronto, Winnipeg, and Calgary, and hate the chances of Ottawa. Interestingly the team that’s creating the one sizable divide is Montreal; MoneyPuck gives them a better than average chance, SportsClubStats an average chance, and HockeyViz a slightly below average chance. At any rate, it’s fair to say Montreal is firmly on the bubble.

What does this mean for the fate of the Canadian teams as a collective? We can simulate the consensus measures and see how many times a certain number of teams reach the playoffs. Not surprisingly, the math loves the chances of a ‘Canadian majority’ come April: 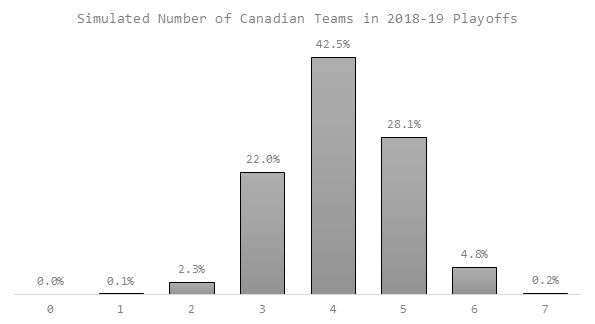 Based on where everyone sits today, the most likely outcome is for four of seven Canadian franchises to reach the postseason. That includes every possible combination of four teams, but the most likely scenario would obviously include Toronto, Winnipeg, Calgary, and one of Montreal or Edmonton.

What’s really interesting is that the odds of Canada getting at least four teams into the playoffs is much higher. When you consider all of the possible combinations, there’s a 75 per cent chance Canada sends at least four teams into the postseason. That’s because there’s still a reasonably high likelihood that five teams (28.1 per cent) reach the playoffs, and six teams getting in (4.8 per cent) isn’t out of the question either.

At any rate, it certainly seems like things are headed favourably for Canadian hockey representation. Last year saw only two teams reach the playoffs, and only Winnipeg was able to make it out of the first round. We won’t see that in 2018-19.