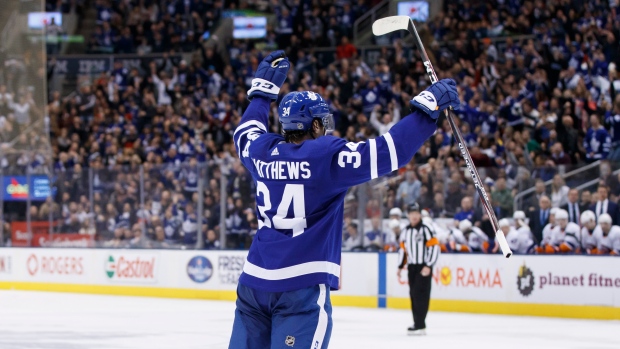 David Pastrnak and Alex Ovechkin are tied at 37 goals in the Rocket Richard Trophy race with Auston Matthews just one back.

"Two really good players so just to be in the same category as them, it's pretty humbling, but it's not really the main focus," Matthews said. "I want to score and produce and help this team win, but that (goals race) is not the main focus for me."

Ovechkin has potted 11 in his last five games to catapult himself up the leaderboard.

"That guy's going to score on any given night, any given shot so, I mean, almost 700 goals in this league, I don’t think anybody’s surprised by that," Matthews said. "He gets hot and he gets really hot. It's pretty fun to watch, but I don't think anybody’s really too surprised with that."

Matthews is pretty hot these days himself with 20 goals in his last 21 games despite playing through a right wrist injury during much of that stretch. Teammates are, of course, impressed with 36-year-old Jason Spezza admitting he's tried to learn from the 22-year-old.

"He uses his feet differently than most guys do, which I've found being around him daily," Spezza observed. "It's something I've added to how I'm shooting the puck off the half-wall a little bit and I think he's one of the best at creating deception that way. He does a lot of things that are unique that you're seeing now filter through the league, but he was probably one of the first guys."

"The way he hides which foot he's shooting off of and kind of the way he moves them can be deceptive for goaltenders," Spezza explained. "It's a weight shift thing that he does and it's something that makes his shot even more deceptive. It's not just the fact that he slings it with his hands, his feet are always in motion too."

Matthews has used his shot to torch the Senators throughout his career starting with that four-goal explosion in his debut game. Overall, Matthews has 12 goals and 19 points in 13 career games against Ottawa.

Matthews has a great amount of respect for the job former Leafs assistant coach D.J. Smith has done in his first year behind the Senators bench.

The Leafs have been off since beating the Stars in Dallas on Wednesday and have a huge showdown with Florida looming Monday with a day off on Sunday. Any concern about a letdown?

"It's less of a trap game just because we're coming off a break," Spezza pointed out, "so you're not really in the grind of the season, you're fresh, you're trying to get rolling here a little bit. We know they're playing well. They're a team that has given a lot of teams trouble lately ... We’re trying to get rolling here out of the break and we know we have important points to get so that won't be issue tonight."

After being a controversial healthy scratch against the Senators on opening night, Spezza will finally get his first taste of the Battle of Ontario on the Toronto side.

"It's not that big of deal, to be honest," Spezza insisted. "I got great memories, my time in Ottawa was the best time of my career, we had great teams, but I've been gone for five years now so it's less of a nostalgic thing and more just it’s a divisional team now. But my time in Ottawa was great, some of my best friends were made there, the organization was really good to me ... but as far as nostalgia coming into tonight, there's not a whole lot, there's not many guys there I've played with."

But Spezza does admit the return home this season, despite failing to earn a consistent role under Mike Babcock early in the year, has been what he hoped.

"I really appreciate the Original Six, you know, the history behind it, the nostalgia of Saturday night games and all that, I enjoy that, so that's been fun," Spezza said. "Being able to be around my family for my kids has been great, made it easier to settle in and then just the fact that we're a team trying to establish ourselves, become a real contender, has been exciting for me. It gives you a purpose and it gives you a role and it's been enjoyable so far."

Spezza's wife and four daughters will be in attendance tonight.

The Battle of Ontario certainly means something to 29-year-old Michael Hutchinson, who grew up in Barrie, Ont., and will be getting his first taste of the rivalry tonight.

"It was huge," Hutchinson said with a smile. "I remember watching growing up. I was a big Leafs fan and I remember the energy around the house and my dad being excited about the games and stuff. It's funny now having Spezz here and he'll talk about the Battle of Ontario days when they used to play each other a ton during the season with the way the schedule used to be so it's a fun thing to be a part of and I'm really looking forward to tonight."

The Leafs only have four back-to-back sets left and Sheldon Keefe is looking for other games to get the back-up goalie in. Frederik Andersen has looked solid in two games out of the bye week, but is already up to 41 starts, two behind Carey Price for the league lead.

"We're trying to reduce the workload for Freddie," Keefe noted. "We have five games here in the next eight days and, you know, Fred played two on the road plus he had the all-star deal so this one just made sense."

"You see a little bit of a change just in his confidence," the coach observed. "It's natural that he'd be insecure with his place in the whole deal here. But, he's played well and earned some wins and he feels like he belongs here now. Each day you can see a little bit more personality in him and that's a really good thing."

After 19-year-old Rasmus Sandin was driven into the boards from behind by Blake Comeau on Wednesday night, Cody Ceci rushed to confront the Stars forward with Matthews right behind him. Ceci ended up as the only guy in the box when the dust settled.

"That was a terrible call," Keefe said. "I mean, if you're going to call that you can probably look at calling driving a guy into the boards from the numbers."

"Those are the ones you like to see your team rally around and make sure you get the kill and it was a great response," Keefe said. "I don't think it was one that warranted a penalty but, at the same time, it just shows we don't like those types of hits."

Everyone comes to the aid of Rasmus Sandin after this hit from Comeau pic.twitter.com/MOrMwTQnNw

Earlier in the game, Jamie Benn had tried to lay the body on Sandin, but the rookie was able to bounce off the check. In general, Sandin doesn't seem too bothered by the physicality in the NHL despite standing 5-foot-11, 183 pounds.

"It seems like he really doesn't get hit often," Matthews said, "but guys finish checks and that’s the way the game goes. I think that was in the first period, Benn came running at him and he just stepped to the side and made a perfect pass right in the middle, that's just the poise and confidence that he has as a player. He's a special player, makes plays all over the ice and can skate really well. When guys come at him to finish checks, he's not afraid to continue to make the play and he’s skilled enough to get out of the way a lot of times."

Not even a clean hit from the 207 pound Jamie Benn is going to stop Sandin from making a clean slip-pass to generate a zone-exit. pic.twitter.com/pA3EQyY0UV