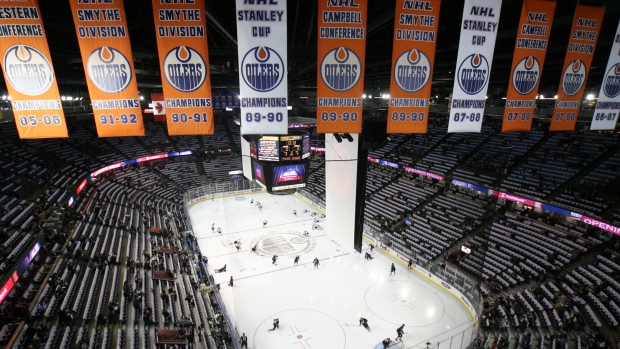 It arrived late, asked for money, and overstayed its welcome.

But if Rexall Place (nee Skyreach Centre, nee Northlands Coliseum) was a lousy guest, it was the perfect host for almost 42 years of highs and lows that most fan bases can only dream about.

Fans and former players will say goodbye to a building that Edmontonians at the dawn of the 1970s didn't feel was even necessary. Citizens back then had twice rejected plebiscites to fund a new rink to replace the 7,000-seat Edmonton Gardens.

But when the Oilers and the World Hockey Association took flight in 1971, and with the Commonwealth Games eventually coming to the Alberta capital, city leaders realized a bigger building was needed.

The Edmonton Exhibition Association picked up the tab, with multimillion-dollar cash infusions from the feds and the province. They broke ground in 1973 on five hectares of land.

Then the problems started.

The soil was unstable. Construction workers went on strike. Steel didn't show up. The crane broke down. The cost soared from $10 million to $18 million.

Deadlines fell like dominos until a patchwork Coliseum finally opened on Nov. 10, 1974, before a sold-out crowd of 15,326. The Oilers and ageless goalie Jacques Plante beat the Cleveland Crusaders and netminder Gerry Cheevers 4-1.

That night, crews continued to install seats as fans entered. The dressing room was a bench. Heating was scarce. Some concession workers wore winter coats. The men's washroom had no dividers between the toilets.

The bugs got ironed out. The Oilers and their fans settled into their new building, growing with the WHA team until Oilers owner Peter Pocklington changed everything in 1978 by acquiring a teen named Wayne Gretzky — the kid who would make the building famous.

On Jan. 26, 1979, Gretzky was already a rising star in the WHA when he celebrated his 18th birthday at centre ice, surrounded by his family beside a cake shaped like his 99 jersey number and signing a 21-year multimillion-dollar personal services contract with Pocklington.

"Looks like I'm here for life," said Gretzky. "Everything is great here. There's no sense leaving."

Less than a decade later, Pocklington would be demonized by Oiler faithful for trading the man known as Waynederful to the Los Angeles Kings for 30 pieces of silver (actually US$15 million, plus two players and three first-round picks).

But in the intervening years, Gretzky and core stars like Mark Messier, Jari Kurri, Paul Coffey, Kevin Lowe, Glenn Anderson and Grant Fuhr — under the direction of master strategist Glen Sather — would turn the game on its head with their up-tempo, Euro-style free-flowing pond hockey game that delivered one escalating triumph after another.

On a bitterly cold Dec. 14, 1979, they beat Guy Lafleur and the visiting Montreal Canadiens 5-3 — the first team ever to beat Les Glorieux on its first try.

In April 11, 1981, they knocked the storied Habs out of the playoffs in three straight, clinching the sweep at home.

And then the capper on May 19, 1984, when Dave Lumley fired the puck 180 feet into an empty net to seal the Oilers' win over the New York Islanders for Edmonton's first Stanley Cup.

The Coliseum was the launch point that night for celebratory mayhem that eventually forced police to cordon off the downtown. Thousands of fans honked horns, swilled bear, jumped on cars, hung off telephone poles and buses, and yelled "We're Number One!"

The Oilers won it all again the next year, but it was almost as if Edmontonians couldn't take it all in. Too much in too short a time.

There were empty seats during the playoffs. Bars reported brisk traffic on game nights, but not like the year before.

Fans were urged to make more noise, the forerunner of sarcastic quips in later years about the silence of "Northlands Mausoleum."

The dizzying highs were followed a year later by an equidistant low in Game 7 of an early playoff round against the hated Calgary Flames.

With 15 minutes left in a nail-biting 2-2 tie, and Flames buzzing around the Oiler net, rookie defenceman Steve Smith fired a breakout pass that banked off Fuhr's leg and into the goal.

Fans were stunned into silence and Smith found himself stapled to the bench as Calgary held on for a 3-2 win to end the Oiler's Cup run.

Smith, eyes red-rimmed, gamely answered reporters' questions, even managing a weak joke: "I got good wood on it."

Redemption for Smith and the Oilers came with a Cup win a year later, followed by two more in 1988 and 1990.

But by then the genesis of the great teams was an exodus. The greats left one by one as Pocklington struggled to keep up in the NHL's new big money era.

Gretzky came back for one last hurrah in Oct. 15, 1989, setting the all-time NHL points record as a King by beating the Oilers in overtime.

In the years that followed, the rink hosted a mishmash cavalcade of returns, reunions, and number retirement ceremonies.

In the 1990s, the on-ice game in Edmonton was overshadowed by high stakes table hockey. Pocklington played chicken with the non-profit board that ran the Coliseum, threatening to move the team without rink improvements and a bigger slice of the revenue pie.

More seats were added along with luxury boxes and a new scoreboard, but by 1997 Pocklington's financial stresses were too much. He sold the franchise to a board of community owners who passed the hat to keep the team in town.

Joy returned briefly in the spring of 2006 when defenceman Chris Pronger put the Oilers on his shoulders and carried them to Game 7 of the Stanley Cup final before losing to the Carolina Hurricanes.

For a brief period the magic was back at Rexall. Journalists on the catwalk could feel it shake ever so slightly amidst the clapping, foot-stomping and ear-splitting cheers from fans when the Oilers skated out under a replica oil derrick to hit the ice.

That was the last of the good times. The Oilers and new owner Daryl Katz have missed the post-season for the last 10 seasons in a row.

For a while starting in late 2013 disgusted fans began a new tradition by throwing their Oiler jerseys on the ice.

The rink began looking its age, with spotty Wi-Fi and concrete steps blackened by the trudge of countless footfalls.

This fall, the Oilers move into shiny, new downtown Rogers Place. The life-size bronze statue of Gretzky outside Rexall will move there, too.

But it will be tough to match the glory of the only home the Oilers have known in the NHL.

It was a place where, for over a generation, fathers and sons, mothers and daughters would grab a bag of popcorn and get lost for a few hours in a make-believe world of illusory importance underpinned by real and raw emotion.

It was a memorable roller-coaster ride and a confetti and streamer reminder that in sports, as in life, the joy is in the journey.