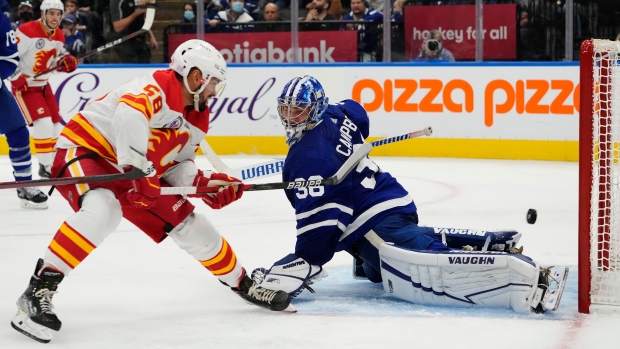 American Thanksgiving adds a unique aspect to the NHL schedule this week.

There will be no games on Thursday!

Instead, we’ll have a full slate of games on the usually light Wednesday and Friday nights.

Since we have a day with zero games and therefore a lot of loaded nights in the NHL, it’ll be even more important to set lineups in advance to see which nights you have room to load up on streamers.

There are four teams limited to just two games this week: Arizona, Calgary, Detroit and Los Angeles. As always, fringe players should be released to the waiver wire.

On the flip side, there are 11 teams with four games. All but one of those teams will begin their week on Monday, only Philadelphia will begin the week on Tuesday, so for those in next day free agent adds, the Flyers are a good target if you’re looking for quantity.

While there aren’t any clear winners in terms of quality of schedule, there are a few teams to like this week.

The Canes get the Sharks on Monday, before facing off with the Kraken on Wednesday. They’ll close the week against the Flyers and Capitals.

The Kraken are giving up a league-high 3.88 goals per game this season. Prior to Sunday, they had given up at least four goals in six straight games. Kraken opponents should always be a popular streaming option.

The Blues kick off their week with a tough matchup against the Golden Knights, but things get much easier after that.

They’ll face the Red Wings, Blackhawks, and Blue Jackets to close out the week. Those teams are giving up the fifth, sixth, and 11th most goals per game this season.

Carolina’s 2020 first-round pick has scored in three straight games while playing on the top line alongside Sebastian Aho and Andrei Svechnikov, and is now up to four goals in nine games this season. The 19-year-old is also seeing time on the second power-play unit. Jarvis is no stranger to lighting the lamp, doing so 57 times in 82 games over his past two years in the WHL. He also scored seven times in just nine games in his short stint in the AHL last year. He’s available everywhere, and should be getting more attention while he holds down prime real estate on the Canes’ top line.

Robert Thomas is quietly having a very good season with 16 points in 17 games. He’s not shooting at all – just over a shot per game – and only two of his 16 points are goals, but Thomas is playing over 19 minutes per game while he centres the second line. The result is nearly a point-per-game player as we approach the quarter mark of the season. As mentioned the Blues have a good schedule this week, especially toward the back end. There’s no reason Thomas should be available in nine out of 10 leagues.

It’s time to keep an eye on Oliver Kylington. The Flames defenceman has 12 points over his last 14 games with a plus-10 rating. He doesn’t get any power-play time – in fact all of his points this season have come at even strength – and he’s playing just under 17 minutes per game which is only 10th on the team, but he’s been on such a tear we must start paying attention. The Flames are third in the league with 27 points and have scored the fourth-most goals this season, which has helped Kylington rank 10th among defencemen in plus minus and 18th in points. The Flames play just twice this week, but they’re back up to four games next week, so take that into consideration.

While his teammate Troy Terry is getting all the attention with his incredible start to the year, Trevor Zegras is quietly putting together an impressive rookie campaign. The Calder Trophy hopeful has six goals, nine points over his past 10 games. He’s centering the second line behind Ryan Getzlaf, but sees time on the top power-play unit. His 32 per cent shooting percentage over the last 10 games is obviously unsustainable and he’s playing fewer than 17 minutes per game, but we’ve seen enough from the budding star to give him a shot. The Ducks, which rank sixth in the NHL in goals per game to date, play four times this week.

From one rookie to another, Dawson Mercer has been on a tear with the Devils to start his career. The 18th overall pick in last year’s draft has seven points in his past six games and is up to 12 points in 18 games on the season, third among rookies. Like Zegras, Mercer centres the second line while playing on the top power-play unit, so the opportunities are there. Mercer comes with a ton of prospect pedigree as well. He lit up the QMJHL over the last two seasons putting up 96 points in just 65 games. He’s also an incredible two-way player, winning the Guy Carbonneau Trophy last season as the league’s best defensive forward, which only leads to more trust, and more playing time.

Sticking with the Devils, it’s time to add Mercer’s linemate Jesper Bratt. The Swede has 12 points over his past 11 games and is on pace for 62 points this season, doing so with a 9.8 per cent shooting percentage which is lower than his career average of 11.1 per cent. Bratt is coming off a respectable season as well. He put up 30 points in 43 games last year, a 53 point pace, but it looks like the 23-year-old is reaching another gear this season.