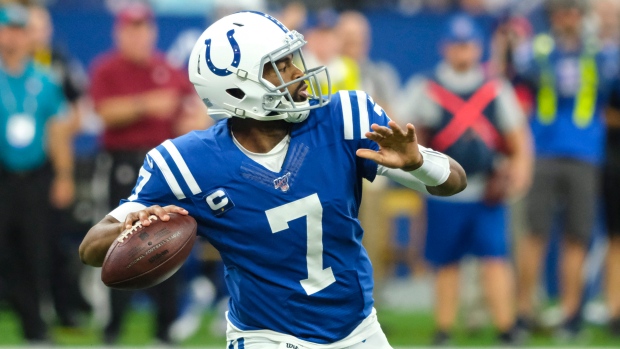 It seems as if we've had at least one marquee name on the waiver wire each week of the fantasy football season ... until now.

This week is filled with solid depth options and maybe players who have upside down the road but ultimately, we don't have that one big name to spend a ton of FAAB on. This doesn't happen often but tight end might be the strongest position heading into the Week 5 waiver wire process.

There are two things in play when it comes to Andy Dalton in Week 5: the Cardinals defence is atrocious without Patrick Peterson and the Bengals are passing the ball a ton this season. Without Peterson, the Cardinals have allowed 10 passing touchdowns without a single interception. That has led to them allowing the third-most fantasy points to opposing quarterbacks so far this season. Entering Week 4, the Bengals are also throwing the ball on 72.9 per cent of their offensive plays, the highest mark in the NFL. The offensive line hasn't allowed the Bengals to run effectively, which has led to the volume in pass attempts for Dalton. If you're without Matthew Stafford in Week 5 or are looking for a QB to stream, Dalton is at the top of the list. Just behind Dalton is Jacoby Brissett who will be travelling to the Kansas City Chiefs.

Brissett has played extremely well, completing 65 per cent of his passes and throwing for multiple touchdowns in every game this season. In fact, he's the only quarterback to do that in all four games. He's tied with Patrick Mahomes and Lamar Jackson for the league lead in passing touchdowns, with 10. We just saw Stafford throw for 291 yards and three touchdowns in Week 4 against the Chiefs, plus this game has a massive 57-point total, the highest on the Week 5 slate. There will be points scored, which means we should trust Brissett as a stream in this spot.

If you play in a superflex league or a two-QB league, you're going to need to replace Mitchell Trubisky and Case Keenum. Let's look at the two in-house options there, beginning with Daniel. Trubisky is dealing with an injured left shoulder, which will likely force him to miss Week 5 against the Oakland Raiders. With the Bears on a bye in Week 6, we could see Trubisky back by Week 7. Regardless, if you own Trubisky in the superflex format, Daniel will be on your radar. Daniel was solid against the Vikings in Week 4, completing 22 of 30 passes for 195 yards (6.5 yards per attempt) and one touchdown. Daniel will face the Raiders, who just allowed three passing touchdowns to Jacoby Brissett. This next one is a long-term play and couldn't tell based on his NFL debut but Dwayne Haskins will take over sooner rather than later in Washington. He looked dreadful against one of the worst secondaries in the league in the Giants, tossing three interceptions, but any quarterback who has a chance to start should be owned in these formats.

Ronald Jones at NO

Since the start of the 2018 fantasy football season, owners have been clamouring for Ronald Jones to take the mantle from Peyton Barber. Nothing against Barber but he owns a 3.8 yards per carry in his career. There's no doubt Jones is more potent at this point. Let's take a look at the past two weeks. During that time, Jones has 33 carries for 150 yards (4.5 YPC) and two touchdowns. In that same stretch Barber has 22 carries for 67 yards and one touchdown. Despite having 13 fewer carries this season, Jones has two more rushes of at least 10 yards this season.

If we get to the point where Jones is seeing 15-plus touches consistently, he should be trusted as a low-end RB2/high-end flex option. We cannot argue what Jordan Howard did in Week 4 against the Green Bay Packers. Howard had 15 carries for 87 yards and two rushing touchdowns, adding three catches for 28 yards and a receiving touchdown. The Eagles are huge favourites hosting the Jets in Week 5, which means they could have time to run the ball late in that matchup. Look at Howard as a flex option in this spot.

Darrel Williams was on the list last week but he's still not owned in enough leagues. Look at what happened in Week 4 against the Detroit Lions. Williams finished with just 13 rushing yards but did convert two red-zone touchdowns, adding three receptions for 43 yards. Between Williams and LeSean McCoy, they combined for 10 red zone carries in Week 4. Until Damien Williams returns, Darrel Williams makes for a solid flex option. This last one is a shot in the dark in deeper leagues but Jay Ajayi has informed all 32 teams he's ready to return. It might take an injury to a team's starting back, but we've seen Ajayi have success in the past. Back in 2016, Ajayi finished as the RB11. Again, don't drop anybody of value but if you want a flier to stash on the end of your bench, Ajayi is your guy.

Leading the position, we have two New York wide receivers who play for different teams. Tate is returning from a suspension and joining a Giants team that is now led by Daniel Jones. Tate will provide the rookie QB a reliable option in the middle of the field who can make plays after the catch. Over the past five seasons, Tate has had at least 74 receptions in all of them. Additionally, Tate has finished top 10 in yards after the catch in every season since 2013. He'll instantly be a plug-and-play WR3 in PPR leagues.

Sharing MetLife Stadium with Tate is Jamison Crowder of the New York Jets who may have been dropped due to his bye week in Week 4. Well, Sam Darnold should be back either this week or next and that bodes well for Crowder. If you remember all the way back in Week 1, Crowder had 14 receptions on 17 targets (41 per cent target share) with Darnold as the quarterback. He'll fill that Jarvis Landry role in this Adam Gase offence. If Darnold is back for this week, Crowder makes for a WR3 in their matchup with the Eagles who are allowing the fourth-most fantasy points to wide receivers this season.

Courtland Sutton's ownership percentage caught me off-guard when I saw he was only owned in 54 per cent of Yahoo leagues. I was skeptical of Sutton entering the season because I thought the Broncos would be run heavy. Well, it's 2019 and both Emmanuel Sanders and Sutton are top 15 wide receivers ... for now at least. Regardless, Sutton has had at least seven targets in each game and just had the first multi-touchdown performance of his career. Davante Adams is not expected to suit up for Week 5 as he deals with a toe injury. In that case, Marquez Valdes-Scantling and Geronimo Allison will make for interesting WR3 plays. MVS is likely owned in your league but Allison is readily available. The opportunity will be there for Allison as the Packers need to replace Adam's 378 receiving yards and 25 per cent target share. Allison is coming off a game against the Eagles where he had three receptions for 52 yards and a touchdown.

The Titans teammates are intriguing adds but not receivers you can trust in Week 5 because of their matchup against the Buffalo Bills. This makes Corey Davis and A.J. Brown prime stash candidates as the Bills are allowing the fifth-fewest fantasy points to wide receivers this season. Davis and Brown are coming off a Week 4 performance against the Falcons where they combined for three touchdowns. It's clear that Brown is a playmaker but will he be able to maintain that on just 14 per cent target share. As for Davis, we've wanted him to be a thing for a while now but he hasn't been able to develop much chemistry with quarterback Marcus Mariota. Before this week's touchdown, Davis had gone seven straight games without finding the end zone. Both players are talented and offer upside in the right matchup, but Week 5 against the Bills is the opposite.

Jimmy Graham is coming off game where he posted season highs against the Philadelphia Eagles. He finished with six receptions on nine targets for 61 yards and a touchdown. Before that matchup against the Eagles, Aaron Rodgers said he wanted to get Graham and Davante Adams more involved and that's exactly what he did. Graham will face the Cowboys this week who are allowing the eighth-most fantasy points to tight ends in 2019.

If we're talking about great matchups, we have to mention Tyler Eifert going up against the Cardinals. This Cardinals defence has struggled against tight ends so far, giving up six scores to the position in just four games. They also allowed T.J. Hockenson and Mark Andrews to go for over 100 yards receiving each. Eifert hasn't been himself yet this season but he is averaging more snaps and targets per game than teammate C.J. Uzomah.

Last but not least we have another player returning from suspension in Chris Herndon. Herndon flashed as a rookie, finishing as the TE15 overall in 2018. It's not often you see rookie tight ends perform well for fantasy and it's clear he'll have a significant role in the offence. Herndon will face the Eagles in Week 5 who just allowed that big game to Jimmy Graham.

If you're looking for streaming defences, look no further! The top adds for Week 5 will be the Panthers (vs. JAX), the Eagles (vs. NYJ), and the Titans and Bills who will be facing each other.