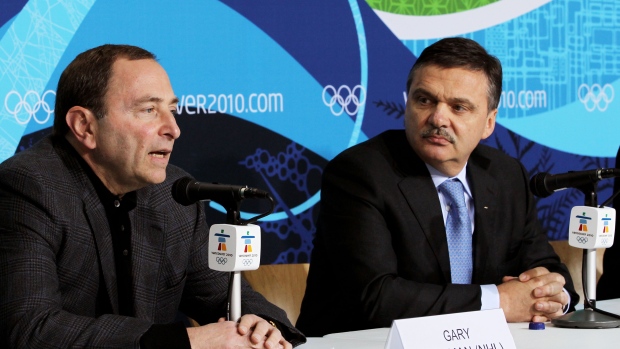 Though the National Hockey League claimed to have turned the page on the possibility of participating in the 2018 Winter Olympics in Pyeongchang, South Korea, International Ice Hockey Federation president Rene Fasel says that his organization remains hopeful on the league's on the league's involvement.

Fasel told German outlet Kölner Stadt-Anzeiger that he is still trying to broker a deal, despite the NHL's announcement last month that the league "consider[ed] the manager officially closed."

For Fasel, the drop-dead date for NHL participation would be no later than mid-July because of the logistics required to accommodate an NHL contingent in South Korea.

"The problem is that the NHL always takes a large number of guests," Fasel told the German newspaper (translated by Inside the Game's Nick Butler). "In Vancouver, we had between 600 and 800 and in Sochi over 400. In South Korea, it would be similar. Gangneung [the site of Olympic hockey games] does not have extra hotel rooms. We can only release these capacities by the end of June, at the latest mid-July."

Fasel, president of the IIHF since 1994, says that NHL commissioner Gary Bettman's demands over NHL participation have been "unrealistic."

"[Bettman] claims the same rights for the NHL as a TOP (The Olympic Programme) sponsor who pays $100 million," Fasel said. He wants to use the Olympic Rings for the NHL.  If the IOC says yes, what do we do with athletics, swimming, gymnastics, skiing, ice skating? Then we would have to grant these rights to all the big sports federations. It is also about the principle."

Fasel, who is currently in Germany for the 2017 IIHF World Championship, says he won't "sell his soul" for NHL participation, but desperately wants the league and its players in Korea.

"I am ready to swim across the Atlantic if it needs to be," Fasel said. "But there is a limit I can not cross. And if the NHL decides not to come, then so be it."

But TSN Hockey Insider Darren Dreger reported on Monday that Fasel's efforts could be in vein.

IIHF's René Fasel in Paris Tues. I'm told there isn't more that can be done to sway NHL owners to change view on 2018 Olympics. Too late.

As Fasel travels to Paris for the next stop in his world championship trip on Tuesday, Dreger reports that sources tell him that the owners have made up their minds on the Olympic matter and there's little that Fasel can do to persuade them otherwise.

The IIHF president also noted that there shouldn't be a problem on his end if Alex Ovechkin or any other NHL player wants to go to Korea without official NHL participation.

"If Ovechkin wants to play at the Olympics and is registered by his National Olympic Committee, he has the right to be in Pyeongchang," Fasel said. "No problem - he must simply have a passport and be reported. There are a few legal hurdles, but we are clarifying this. Certain parameters must be fulfilled, such as anti-doping."

The NHL has participated in every Winter Olympic Games since the 1998 edition in Nagano, Japan.