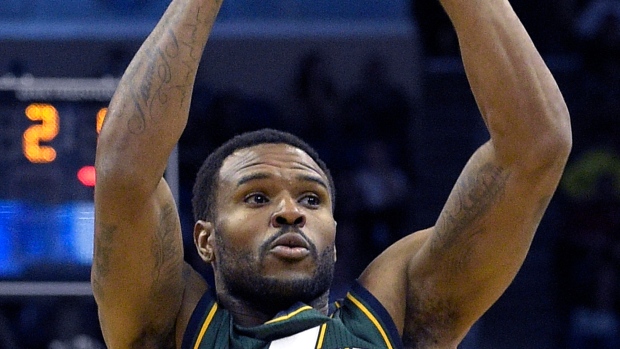 ORLANDO, Fla. - It took nearly two months, but the Utah Jazz finally has a winning streak going — modest as it might be.

The Jazz rode 23 points from Derrick Favours and 20 from Gordon Hayward to a 101-94 win over the Orlando Magic.

The win comes two nights after beating Miami, giving the Jazz back-to-back victories for the first time this season. Enes Kanter had 11 points and seven rebounds and Trey Burke added 11 points and five assists for Utah.

"We're taking some steps to improve and it's resulting in wins," Utah Coach Quinn Snyder said. "We've got to understand why that is happening so we can keep doing it. When we share the ball. That is when we're at our best."

The Jazz shot 53.4 per cent for the game, their third straight game of hitting 50 per cent or more from the field. Most of the scoring came in the paint where Utah was 24 of 34 for the game against a timid Magic defence. The Jazz also went to the free throw line 24 times to just 12 for Orlando.

"We owed this team (Magic) one," Hayward said. "They kind of roughed us up in Utah (earlier this season), but we played with a lot more force tonight. We were a lot sharper and were able to get a lot of good shots."

Tobias Harris led Orlando with 24 points and Evan Fournier 21. Harris and Fournier combined for 7 of 11 shooting from 3-point territory and Nik Vucevic added 16 points and nine rebounds, but it was not enough to prevent their fifth loss in six games.

Rookie Elfrid Payton came off the bench to score 11 points and get 11 assists. It was his first double-double of the season. He also helped hold Burke to 5-of-15 shooting for the night.

"I give him a lot of credit," said Orland coach Jacque Vaughn. "He comes in the game trying to change the pace and he's going to make mistakes, but his ability to listen and respond and keep playing is a good sign. He's putting himself in positions where he is finding success."

Utah shot 70 per cent in the first period and didn't drop below 55 per cent shooting until the nine minute mark of the fourth quarter. The Jazz led 85-74 at that point, but the Magic went on a 10-4 run punctuated by a 3-point play from Harris to cut the deficit to 89-83 with 5:28 left in the game.

Orlando had several chances to draw closer to Utah in the final five minutes, but couldn't take advantage of the few defensive stops they got. Hayward and Favours kept Utah out of trouble, scoring seven of the Jazz's last nine points to preserve the win.

The Jazz were up 49-43 at halftime and used a 15-5 run in the middle of the third quarter to push the lead up to 77-60. Hayward scored 12 of Utah's last 16 points in the period, seven from the free throw line as the Jazz drove relentlessly to the basket.

Utah had 24 free throw attempts in the game to just 12 for the Magic and outscored Orlando 19-8 at the line.

Utah: The Jazz had lost 12 of 14 games coming to Orlando. . Rookie Dante Exum followed his two best games of the season, 12 points against New Orleans, 10 against Miami, with just two points and three turnovers against Orlando. .

Orlando: C Kyle O'Quinn was assessed a flagrant one foul for a shot to the head on Jazz F Gordon Hayward. O'Quinn has two Flagrant 1 fouls and one Flagrant 2 this season. . F Tobias Harris, who was 1-for-13 on 3-pointers in his last four games, hit three of five against the Jazz. . Magic Coach Jacque Vaughn was a first-round pick by the Jazz in 1997 and played there four seasons. . Orlando is 0-8 THIS SEASON when opponents shoot better than 50 per cent.

The Jazz are in Charlotte tonight.