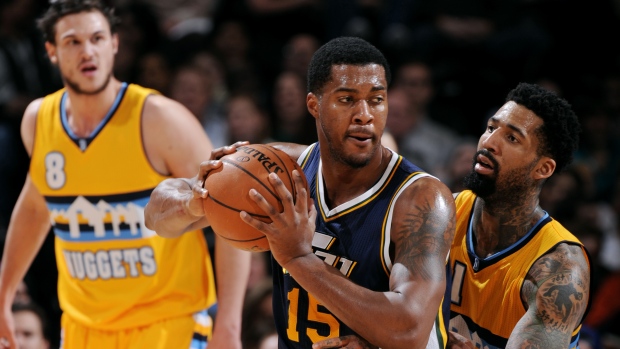 DENVER - The Utah Jazz responded to a tough loss — at the expense of the reeling Denver Nuggets.

Derrick Favours had 21 points, 10 rebounds and three blocks, Trey Burke came off the bench to score 19 points and the Jazz beat the Nuggets 104-82 on Friday night.

Gordon Hayward added 15 points and Rudy Gobert had 10 points and eight rebounds for the Jazz. Utah has won five of its last seven.

The Jazz came into the game a little angry after blowing a 13-point lead in the fourth quarter to the Los Angeles Lakers on Wednesday. That three-point loss served as motivation for Utah, and it responded with a strong performance.

Will Barton had 22 points for the Nuggets. They have lost nine straight at home and 18 of 20 overall. Denver was in the playoff conversation after a five-game winning streak in mid-January, but has fallen into 13th place in the Western Conference.

The home losing streak is Denver's longest since dropping 11 straight during the 1997-98 season. The Nuggets finished 11-71 that season, the worst record in the NBA.

"We are about to lose our sanity," guard Ty Lawson said. "These are most games I've lost in my whole career."

The Jazz took advantage of Denver's struggles and led throughout. Utah led by 18 in the first half and used a big surge in the third quarter to put it away after the Nuggets cut the lead to 11.

"They came out physical in the second half but I think we responded well," said Burke, who has four of Utah's 13 steals. "They went on a little run, coach got on us for a bit and we were ready to play again."

Favours scored 11 points in the period and Burke and Rodney Hood had 3-pointers during a 22-6 run to make it 80-53 at the end of the third.

Even without those two, coach Brian Shaw opted to start rookie Joffrey Lauvergne over Kenneth Faried, who returned after missing a game because of a thumb injury.

Faried had 12 points and eight rebounds for Denver, which finished February 1-9.

"We can't not be the most talented team and continue to get outworked night in and night out and not look like we really care," Nuggets coach Brian Shaw said. "That is the most frustrating for me. I want to see somebody get mad."

The Jazz had 15 blocks to help counter 20 turnovers. Gobert had six blocks, one shy of his career high, in a strong defensive game overall by Utah.

"Our team has come to understand what we've wanted. It's not easy to play defence," Jazz coach Quin Snyder said. "It takes work, it takes effort and it takes a collective mindset."

Jazz: Utah guard Alec Burks, out for the season with a shoulder injury, is with the team. Snyder said it helps Burks to be around the team. "He's in film sessions, he's eating team meals with the players," Snyder said. "Whatever he can get out of this season and this time, even if he's not playing, is really important." ... Favours has 10 had at least 20 points and 10 rebounds in 10 games this season.

Nuggets: The Nuggets were outrebounded for the 15th straight game. It's the longest streak in franchise history. ... Forward Wilson Chandler returned from a two-game absence due to adductor soreness. ... Denver hasn't won consecutive games since the five-game winning streak from Jan. 3-14.