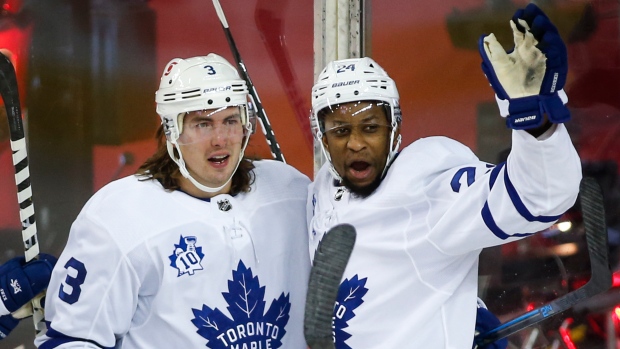 TSN Toronto Reporter Mark Masters reports on the Maple Leafs, who practised at the Ford Performance Centre on Tuesday. The Leafs host the Vancouver Canucks on Thursday night.

The Wayne Train is rolling up the Leafs lineup.

Wayne Simmonds started the season on the fourth line before moving to the third line after an injury to Joe Thornton. At Tuesday's practice, he skated on the second line alongside John Tavares and William Nylander.

"On the road trip, he was a real standout for us," said head coach Sheldon Keefe. "He's got lots of jump. He looks quick and he's on the puck. He's competitive. He's around the net. He found a way to score in three straight games for us, which has given him a little extra confidence and a little extra boost."

Simmonds, for his part, downplayed the Alberta goal spree during a Zoom session following Thursday's win in Edmonton.
"The way I've been able to skate and make contact and get in our forechecks, that's the way I gauge my game," the 32-year-old said. "The goals are kind of extra and they come along with it."

Two of the goals Simmonds scored came on the power play where he serves as the net-front presence. He has repeatedly told Mitch Marner, who operates on the flank, to feel free to shoot the puck at his chest to create rebound opportunities.

"He's fearless," noted Nylander with a smile. "He works really hard. He's got a lot of energy all the time, which is fun ... He's a heavy body in front of the net and wins pucks back and is a great net-front guy. We had some nice chemistry in practice today."

The Tavares line has struggled to generate goals in five-on-five play. Nylander has three even-strength goals, but one came on opening night and one came just as a power-play expired on Thursday. Tavares, meanwhile, has yet to bulge the twine at even strength. Jimmy Vesey started the season with that line before giving way to Ilya Mikheyev during the last three games of the road swing.

Now, Simmonds is getting a look. What can he bring?

"Just helping to break opponents down and get some pucks more to the middle of the ice, get them off the walls and doing a good job of maintaining possession," said Tavares, "and having the ability and touch around the net to make plays."

Simmonds had been slotting in beside Alex Kerfoot before Tuesday's shuffle.

"He's an easy guy to play with," Kerfoot said last week. "You know what you're getting from him every night. He's easy to read off or on the ice."

"He knows how he's got to make his presence felt," said Tavares, "and what makes him a consistent player on a nightly basis. It's great the energy and passion he brings."

After a few injury-plagued years, Simmonds benefited from a long off-season in which he could focus on building up his body instead of rehabbing it. As a result, he feels like he's skating and moving much better.

Simmonds, who's in his 13th NHL season, was among a handful of veterans to take part in an optional practice on Monday.

"He was one of our players who had the option and he wanted to come in and get some extra work," Keefe said. "He's learned to really value the development sessions that we have around here whether it was the ones in the off-season or during the season ... It's all positives surrounding Wayne so we wanted to give him a look with John and Will today."

Keefe stressed that the lines for Thursday's game against the Vancouver Canucks are still to be determined. The coach wants to see how Vancouver looks against Montreal on Tuesday night before making any final decisions. But Simmonds certainly made the most of his audition.

With Simmonds moving up, Mikheyev moved down to the third line. He has just two assists on the season.

"We'd like to find ways to help him generate more offence," said Keefe. "We think with the speed and power and size that he has, he can get to the inside a lot more [and] challenge defenders a lot more and if he's not going to generate chances he can draw penalties or create opportunities for others."

Mikheyev has drawn three penalties this season, which is tied for second on the Leafs with Morgan Rielly, one behind Kerfoot.

Keefe also revealed the team is working with Mikheyev on some defensive details.

"But, at the same time, we look at his game and he brings a lot to our team," said Keefe. "He's been an effective player for us and all the areas that we look at where he can improve that's just a bonus."

Toronto boasts some explosive, high-end talent, but is only outscoring the opposition 17-16 in five-on-five play.

"We'd like to be more consistent offensively and try and generate some more chances," Tavares acknowledged. "Coming off this road trip, I think we know there were stretches of hockey where we defended more than we liked to."

The Leafs are controlling 50.8 per cent of shot attempts this season, which is 15th in the NHL entering Tuesday's games. Toronto finished last season at 52 per cent, which ranked sixth overall.

"There's a distinct drop in the first five games we played and the last five," Keefe said. "That's a big area of focus."

During the recent four-game trip, the Leafs controlled only 42.9 per cent of the shot attempts, which ranked dead last in the league in that stretch.

"Some of that is just the teams we played against," Keefe said. "Edmonton and Calgary [are] both teams that are very good with the puck and very good on the rush. We played with the lead for the better part of most of those games and I don't think we managed that very well."

The Leafs are averaging 29.9 shots per game (18th overall entering Tuesday's games), which is down from 32.9 last season (sixth overall).

"Teams are just playing a little tighter against us and getting pucks out so we're not able to get the second chances and we're stuck on the walls," said Nylander. "That's part of our issue and we're working on it. We know that we're capable of playing a heavy, offensive-zone game so I think we know what we can do in there and we just need a little more practice."

The team is prioritizing defence this season, which has led to some growing pains as they seek the right balance within Keefe's system.

"We want to be a better defensive team, more consistent, and at times when you do that you're also not going to get some chances to go your way when the game is more open," Tavares said. "Certainly, we know the depth and the skill-sets that we have on our team so there's a lot of trust and belief in what we're doing."

---
The defence can certainly do its part to help spark the attack.

"Just being cleaner on the break outs," said TJ Brodie when asked where improvements can be made. "That will give us a chance to get through the neutral zone with the puck and get some zone time."

Keefe is making the most of this four-day break between games. The players started practice with a 30-minute development session on Tuesday with the forwards, defencemen and goalie Frederik Andersen all on different pads working on different skills.

When the group eventually came together, they went through 60 minutes worth of work featuring battle drills and plenty of time at the white board.

The Amazon Prime documentary crew was all over it with a camera and boom mic eavesdropping on Keefe's instructions.

"I guess you sort of get used to it," said the soft-spoken Brodie, who joined the Leafs this season after a decade with the Flames. "They're always there. It's almost second nature now. You're just used to it. It's a little bit different coming from Calgary. There's not as many cameras there so it took a while to get used to it."

Amazon Prime Video & @NHL Original Productions announce “All or Nothing: Toronto Maple Leafs", a multi-episode docuseries offering an inside view of the @MapleLeafs including on-ice action & unparalleled behind-the-scenes access to the 2020-21 season. https://t.co/zKSb0XCcMf pic.twitter.com/HpnIy7BZQj

Kerfoot skated before practice, but didn't take part in the main session.

"He's day-to-day at this point," Keefe said. "His situation [is] pretty similar to what Auston [Matthews] had previously, but in this case we have a little bit more time off."

Matthews missed one practice and one game with a hand injury earlier this season.

Travis Dermott replaced Mikko Lehtonen on the third defence pairing at practice. Keefe is still not comfortable with Lehtonen, a 27-year-old KHL import, at even strength.

"We're in a very competitive division," the coach said. "We're in a shortened season. A lot of these bugs, as we've talked to him about, would usually be sorted out through exhibition [games] and that hasn't been possible. So, it's real tough."

Keefe and Lehtonen had a lengthy chat on the ice at the end of Tuesday's workout.

Lehtonen is only averaging nine minutes and 22 seconds of ice time in four games this season. Keefe pointed out that all of Toronto's games have been tight and they also haven't had any injuries on defence.

Nic Petan joined the main group for the first time this season and skated on the fourth line with Travis Boyd and Jason Spezza.

"I just felt, in talking to [general manager] Kyle [Dubas] as we were going through everybody, that Nic belonged in that group and has some things that he can offer us," Keefe explained. "So, brought him in here and gave him a chance at practice on a regular line and he'll be in that mix with our fourth line going ahead here ... we definitely feel like he belongs in that group and should get an opportunity."

The fourth line has been a bit of a revolving door of late with Boyd, Joey Anderson, Adam Brooks and Alexander Barabanov all getting looks.

"It's definitely an abnormal process," the 25-year-old said of staying ready for the next chance with no American Hockey League season happening yet. "You just try and focus 24 hours at a time. Wake up, go to the rink, get home and it's kind of repetitive, at times it's tough, at times you just have to find a way to have fun with it."