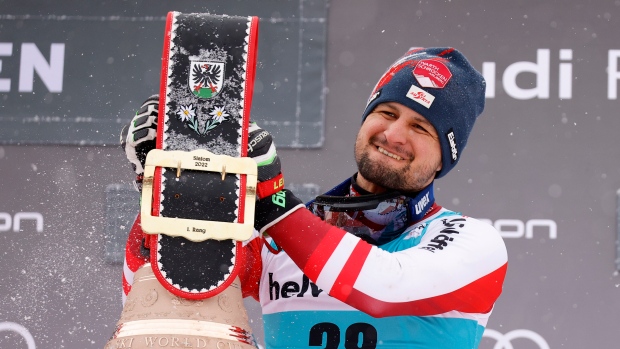 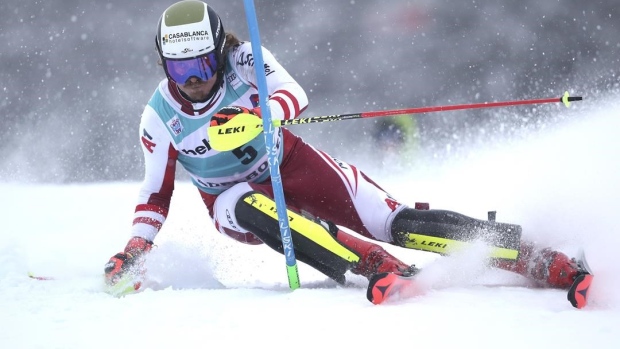 ADELBODEN, Switzerland (AP) — Wearing low-ranked bib No. 38, Johannes Strolz was the shocking winner of a World Cup slalom on Sunday.

The 29-year-old Austrian had a career-best finish of 10th in more than eight years of World Cup racing. The son of an Olympic champion, Strolz was in tears sitting in the finish-area leader’s seat watching rivals fail to match his time.

First-run joint leader Manuel Feller bowed theatrically across the finish area to acclaim his unheralded compatriot after seeing his time was 0.17 seconds behind in second place.

Strolz is not even an official member of the powerful Austria team this season and prepares his own skis for races without the help of a technician.

“Even when I got kicked out of the team I had support in autumn when we prepared for the season," he said. "So many coaches in the team still believed in me.”

Linus Strasser of Germany was third, trailing by 0.29. Strasser had been 14th-fastest in a tightly contested first run in the morning when Strolz placed seventh racing during a brief spell of bright weather on the storied Chuesnisbärgli hill at Adelboden.

“I was lucky in the first run with the visibility," acknowledged Strolz, who had 0.17 to make up in the second leg raced through steadily falling snow. “Finally now it all came together.”

His chance for victory Sunday first opened up when three pre-race favorites failed to finish the first run.

World champion Sebastian Foss-Solevaag, drawn to wear No. 1, slid out four gates from the end and No. 3 Clement Noël went out early in his run.

A crash for Kristoffer Jakobsen, who remains tied for the slalom standings lead with Foss-Solevaag, turned him around and sent him sliding into a finish-line structure.

Strolz soared directly into third place in the slalom standings with the 100 race points he earned for the surprise win.

The result had little impact on the overall World Cup standings as defending champion Alexis Pinturault failed to finish his second run after being fifth-fastest in the morning. He stayed a distant fourth overall behind Marco Odermatt, who won Saturday's giant slalom but skips slaloms.

Feller was runner up for the second straight day though seemed equally happy for Strolz to have won.

“He had a pretty tough time the last years,” Feller said, describing Strolz as “one guy (who) deserves it more (than) me.”

With five more World Cup slaloms before the Beijing Olympics open Feb. 4, Strolz has time to confirm the form of Sunday's win and try to win selection to Alpine skiing's Wunderteam.

The 2010 Olympic slalom champion, Guiliano Razzoli, placed ninth to give the 37-year-old Italian a third straight top-10 finish in what is shaping up as a bounceback season.