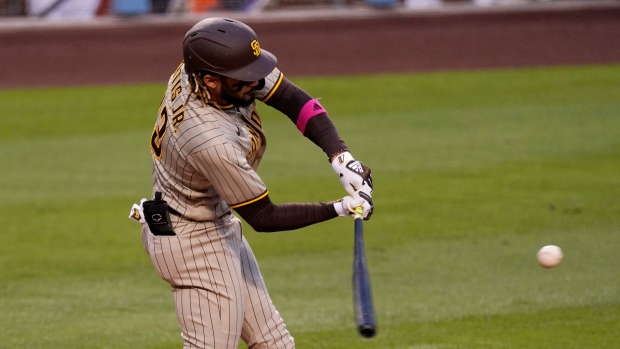 San Diego Padres shortstop Fernando Tatis Jr. tested positive for COVID-19 and was placed on the injured list on Tuesday alongside utility players Jurickson Profar and Jorge Mateo, both of whom joined Tatis on the IL as part of Major League Baseball's contact-tracing program.

Padres manager Jayce Tingler found out about Tatis' positive test late Monday night and said he is asymptomatic. As part of the health-and-safety protocols, Tatis must isolate from the team for 10 days -- which means he'll fly back from Colorado to San Diego on his own -- and test negative for COVID-19 before getting cleared to return by a team physician and the joint committee.

Tingler wouldn't reveal whether Tatis had already been vaccinated but said he "didn't break any rules."

Ha-seong Kim will play shortstop in Tatis' absence and Tommy Pham will get the vast majority of the playing time in left field while Profar and Mateo are out. Before returning, Profar and Mateo must quarantine for seven days, test negative on Day 5 or later and remain asymptomatic throughout.

The Padres have yet to reach the 85% threshold of vaccinations that would allow for looser restrictions around their team.

"We're a couple players away from getting there," Tingler said. "Will we get there? I don't know at the end of the day. I think we're optimistic. We're just a couple guys short. The one thing with the protocols and things like that -- it's a clear competitive advantage to get to that 85%. Our guys are educated, we're educating them on it. That's where we are."

Tatis leads the Padres with nine home runs despite missing time earlier this season with a shoulder injury and has flourished on the road, batting .385/.405/.897 in 42 plate appearances. The Padres, 19-16 while in second place in the National League West, are scheduled for a doubleheader from Coors Field in Colorado on Wednesday but will have a day off before beginning a nine-game homestand on Thursday.

"Look, it's a blow," Tingler said of losing Tatis. "But we have the guys."