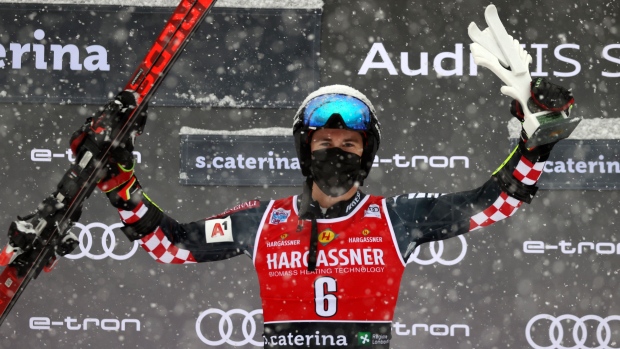 Zubcic was almost seven-tenths off the lead after the opening run but posted the second-fastest time in the final and beat Kranjec by 0.12 seconds.

“The slope was really difficult," Zubcic said. "(It’s) snowing, but I skied really good. I had a lot of trainings in conditions like these so for me it was quite normal. I am a really strong skier, I have the power and that’s why when the conditions are tough, I can ski really fast.”

Competing on the World Cup for eight years, Zubcic failed to land a podium result until he came runner-up to Kranjec in the classic GS in Adelboden, Switzerland, in January 2020.

The following month he triumphed in Naeba, Japan, before ending the season with another second place in Hinterstoder, Austria, in March.

“Last season was the best season I ever had, so I was hoping that I will stay in the same direction,” said Zubcic, adding that his previous win also came in difficult circumstances.

“Naeba was also tough. It was completely different, as it was much warmer and it was like spring snow,” he said. “But today was real winter, I mean, the weather was beautiful.”

The Norwegian team struggled with the challenging conditions.

Defending overall champion Alexander Aamodt Kilde finished 1.31 behind in ninth; Lucas Braathen was 1.86 behind in 12th; and GS world champion Henrik Kristoffersen placed 22nd after he only just avoided a crash in his second run.

The 20-year-old Braathen became the youngest winner of a World Cup race in six years when he won the season-opening GS in Soelden in October.

Erik Read timed the fastest run in the second leg, lifting the Canadian from 23rd to 10th place.

Course workers cleared the slope of up to 80 centimetres (31 inches) of fresh snow during the night.

The event was moved from Val d’Isere because of a lack of snow in the French resort.

Another men’s GS is scheduled for Sunday.