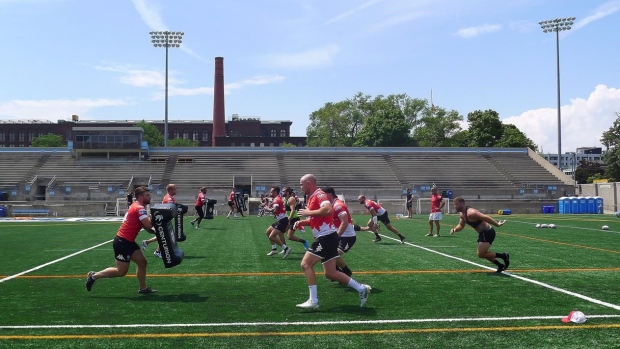 TORONTO — The financially troubled Toronto Wolfpack, a rugby league franchise without a home, have started a GoFundMe campaign to help players and staff who have not been paid since June 10.

The transatlantic team, which has 50 full-time employees in Canada and the United Kingdom, stood down July 20, saying it could not afford to play the remainder of the Super League season.

That hiatus turned into a seemingly permanent dead end Nov. 2 when the remaining 11 Super League clubs and the sport's two governing bodies — the Rugby Football League and Super League — voted 8-4 with one abstention to reject the Wolfpack's bid for reinstatement in 2021 under potential new owner Carlo LiVolsi.

Martin Vickers, the Wolfpack's U.K. general manager, says the goal of the GoFundMe campaign is to raise 30,000 pounds ($51,775) which will be split evenly among all the staff and players.

That roughly works out to about $1,000 per person if the target is reached. Not exactly a safety net but a helping hand around Christmas.

"There hasn't been any dialogue whatsoever with Super League since the decision," Vickers said Monday from England. "So it's a case of 'That's the end of your club. You guys are all unemployed. You go find your own way.'

"Whilst ultimately (majority owner) David Argyle is responsible for these bills … We just felt hang on, it's appropriate at this time that we just do something ourselves."

The only assistance that Super League and RFL have provided was a one-time "hardship" payment of 30,000 pounds that was split among the players, said Vickers.

That has led to ""some difficult times" for some employees, he added.

Wilkin, a former England and Great Britain international who co-owns several coffee shops and does TV work away from the game, says one of his teammates is delivering dog food to pay the bills.

"Some of the guys been using money that they've saved to help them in the future," said Vickers. "It's been a real hard slog."

While about a dozen players have found other clubs, either on loan this season or permanently, Vickers says some signed for deals "a long way short of what their market level of pay was."

Argyle, unable to fund the club, has stepped away. The Toronto-based Australian entrepreneur has pledged to make good on the missed pay but has not been in a position to do so, according to Hunter.

Argyle has said he and the ownership group have poured $30-million into the Wolfpack since its inception. The team first took the field in 2017, winning promotion from the third-tier Betfred League 1 to Super League in the years since.

Vickers says his frustration is that at a time when COVID-19 has savaged businesses and caused unemployment ranks to balloon, LiVolsi was willing to step up, pay the outstanding bills and keep the franchise going. But the Toronto businessman's offer was refused.

Super League executive chairman Robert Elstone said there were problems with the club's financial plan. He also cited a study commissioned by Super League that concluded operating a team in Canada "would not produce material incremental revenue in the short or medium term."

LiVolsi made his ownership interest contingent on the club being in Super League, among other things.

The RFL has been in talks with both the club and Argyle on the money owed the players, saying Monday it is "reserving the right to take legal action, in the event that such sums are not paid."

Of the club's 50 employees, about half were players. Another 12 are front-office workers based in Canada with the rest mostly U.K.-based coaching and technical staff.

Those in Canada have been eligible for government support during the pandemic. But the English-based staff have not qualified for the British equivalent because the franchise is Canadian-owned. That has also disqualified the club from getting any of the 16 million pounds ($27.6 million) in loans the British government has made available to help support English rugby league during the pandemic.

The Wolfpack's GoFundMe campaign notes "the hardship being faced by everyone globally at the present time." But it asks for help for a "hard-working and dedicated group of people, who have hopefully brought a lot of enjoyment into many people’s lives during the Wolfpack’s short existence.

"And any contribution that you are able to give at this time would be gratefully received."

One five-pound ($8.65) donation received was listed under Robert Elstone, although there was no confirmation that it had come from the Super League boss.

"We were surprised that he's donated so much," Vickers said dryly.

This report by The Canadian Press was first published Nov. 16, 2020