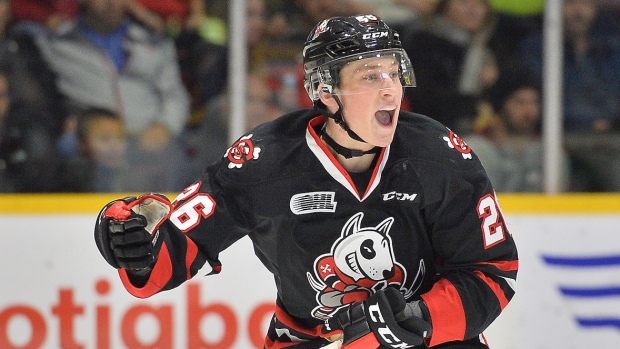 "I remember seeing him at practice the next day and you could just tell he really wanted to make that team and was a little bit upset," Thomas said. "I remember sending him a text that night just saying, 'All you can do is put a fire under yourself and make that team next year.' So, I think there's a lot of fire under Phil this year."

Tomasino was re​d hot down the stretch in the Ontario Hockey League last season, racking up 43 points in 26 games following a January trade to the Oshawa Generals. He finished fourth in the OHL scoring race with 100 points in 62 games.

"I was down after not getting invited to selection camp," Tomasino admits. "I wanted to prove everyone wrong. This year my mentality is to come in here and try to be the best person, first, and also the best player I can be. It's an awesome opportunity."

Tomasino, a first-round pick of the Nashville Predators in 2019, is certainly standing out so far in Red Deer, Alta. He posted five points in two scrimmages to lead all skaters before a couple positive COVID-19 tests forced everyone into a 14-day quarantine.

Thomas, who went on to make Team Canada last year and score the winning goal in the gold-medal game, refers to Tomasino as being like his "little brother."

"He'll make the team," Thomas declared. "He's one of the most skilled players I've ever played with, and everyone's going to realize that very soon."

Tomasino’s talent earned him a look alongside Chicago Blackhawk Kirby Dach, who projects to be Canada's top-line centre, in the second scrimmage, with Flames first rounder Connor Zary rounding out the line. That trio produced four goals in Team White's 6-3 win.

"My mindset is to come in here and make this team, be a big part of this team and do everything I can to help this team win," Tomasino said.

“If you’re part of Team Canada’s coaching staff you had to be thrilled with Dach, Tomasino and Zary...”@CraigJButton & @TSNRyanRishaug on Kirby Dach’s line on Sunday night, Bowen Byram’s performance and Brett Brochu’s work in net: https://t.co/3h3XPse1OR#TSNHockey pic.twitter.com/4do55BFjv8

Tomasino joined TSN for a film session this week to review his notable plays from the camp so far. The following is an edited transcript of the conversation.

You scored off a Dylan Cozens faceoff win in the first scrimmage. What did you see on the play?

"It was the first time we had played in a long time, so I tried to keep it simple. We had talked about a few plays off the draws. I tried to get a quick shot on net. Shot it low with a lot of bodies in front and I got a little lucky that it found its way through. A great job by Coz, the centre, winning the draw back to me and I think it was [Connor] McMichael who set a nice pick in front of the net there ... A lot of teams have set plays, but getting the puck to the net as quick as possible off a draw has always been a big thing for me."

The second scrimmage is when you, Dach and Zary got put together and took off. Let's start with the opening goal. Brandon defenceman Braden Schneider took a point shot and off a scramble Dach put it home.

"Zary was in front of the net there kind of causing a ​disruption, so I just followed the shot and was facing the net and kind of got a little bit of a lucky touch there off my foot. Dacher was in a pretty good position to bury that. I didn't even see it go in the net, so it was a nice little lucky touch and nice start for our line. That was big for us to get that first one under our belt and it led to a lot of success the rest of the game."

Dach (CHI) opens the scoring in the second scrimmage by sticking with a loose puck at the front of the net. Tomasino (NSH) the other to get a piece on it in front. Schneider (NYR) with the point shot. pic.twitter.com/3NyeiqW5do

"He's a pretty big and strong guy, so I don't think defencemen like playing against him. When you have a guy that big and strong, who wins so many battles, it's pretty nice to play with him. He was in front of the net by himself there and found the loose puck and was able to bury it under the bar."

Late in the first period, Dach made a nice rush up the ice and found you in front for a great chance on Prince George goalie Taylor Gauthier.

"Zary passed to him entering the zone and it was a little two-on-two and I knew the guy was behind me, and when you're going to the net you want to get lost in traffic. I kind of made a little step back and found some open space and Kirby made a really nice pass to me and I was really mad at myself that I didn't bury that one. It was a nice save and nice play by Dacher to find me there."

Well, you got some revenge on Gauthier early in the second. You scored the goal, but the Dach spin-o-rama got the most attention. What's going through your mind when he does that?

"I saw him do a spin-o-rama and I saw Zary going to the net, so I figured I'd try and get to the net as fast as possible. He made a nice spin-o-rama and we got a bounce off the net there and it went right in front of me and kind of the exact same play as the last one, honestly. I shot from the exact same spot on Goats at the end of the first period and was able to bury that one."

Kirby Dach (@NHLBlackhawks) with the spin-o-rama and Philip Tomasino (@PredsNHL) with the finish.

Any chance we see you try a spin-o-rama?

"You know what, I practised it a lot in the summer in my training and I think it's an underrated skill. A lot of people don't realize it's so effective. Kirby's a big guy, so when you're that big and strong and able to do that spin-o-rama it's hard for the defence to get you off the puck. I haven't had a chance to do it so far in the two games, but it's something I want to get integrated into my game a little bit more."

Midway through the second period it was your turn to set up Dach. There were a lot of bodies around him, but you put the puck in a perfect spot.

"Entered the zone two-on-two and made a little drop pass to Zary. I drove down the wall below the goal line and I didn't really expect to get the pass back, but Zary made a nice little backhand sauce back to me. I saw Kirby coming in behind everyone and he found a nice little opening. I think it was a great play from all of us. He was open so it wasn't too hard to find him."

Kirby Dach has his second goal (third point of the night) after finishing off this play.

Tomasino and Zary have proven to be fantastic linemates for the #Blackhawks forward.

Were you surprised the chemistry was that good in your first game together?

"Dacher and Zar are two unbelievable players and they're really easy to play with, so I think having a chance to play with those guys was awesome and, like I said, really easy. A big thing is we hadn't played in so long, so the emotions kind of took over and we are just really fired up to get out there and score and help our team win."

You had great momentum in that first week, how are you holding up now in this quarantine?

"A lot of Xbox, a lot of Netflix ... it kind of sucks not being able to be on the ice and training. At the same time, it's all part of the process. In all our Zooms we all talk about trust and trusting each other, and this is a huge thing that will make us better and stronger. I'm looking forward to the tournament."