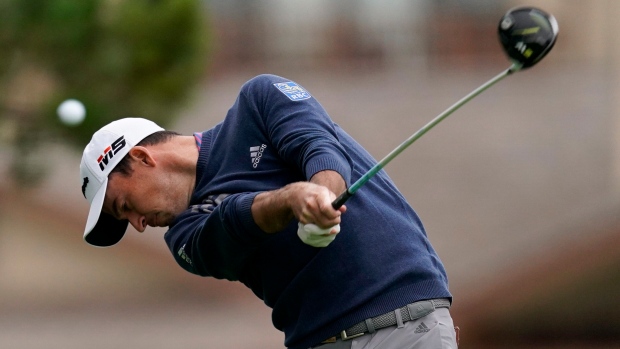 The Canadians continued their assault on Muirfield Village Golf Course on Friday, with five of them sitting inside the top 30 on the leaderboard at the Workday Charity Open when play was called due to darkness.

Nick Taylor, Adam Hadwin, Mackenzie Hughes, Corey Conners and Roger Sloan all made the cut, advancing to the weekend at the tournament being held in Dublin, Ohio.

Collectively, it represented another strong showing for Canadian golfers. There has been a player from north of the 49th in contention in each of the first four tournaments since the restart due to the COVID-19 pandemic, with Conners, Hughes and Hadwin all vying for their second PGA Tour victories.

On Friday, Hadwin and Taylor, who had been in second and third place respectively after the opening round, experienced a tougher day on the Jack Nicklaus-designed course as they both slipped down several spots after posting mediocre scores.

Hadwin fired a 1-over 73 after finding only six of 14 fairways and only 10 of the 18 greens. That latter stat put more pressure on his putter and he wasn’t able to roll in as many as he did on Thursday.

Taylor got off to a fast start by making eagle on the 11th hole, his second of the day, for the second straight round. He added three more birdies over the next six holes and was tied for second. However, he played the next 10 holes in four over par and ended up with a 1-under 71.

Conners moved up 23 spots after a three-round 69 while Hughes was three under on his round when play was suspended. He still has three holes to play in his second round and will start Saturday morning with a birdie putt from just inside five feet.

Collin Morikawa of the United States leads at 13-under par after a second-round 66. He’s made 15 birdies over two days, including nine on Friday, the most in the field.

“Obviously a really good start,” he said after his round, “making a lot of birdies, hitting really good approach shots and, for the most part, the game feels good from top to bottom, whether it's off the tee, putting, approach shots.”

The tournament was delayed twice by storms, one in the morning lasting 90 minutes and another later in the day that paused play for just over an hour. That led to the suspension of play just before 9pm et.