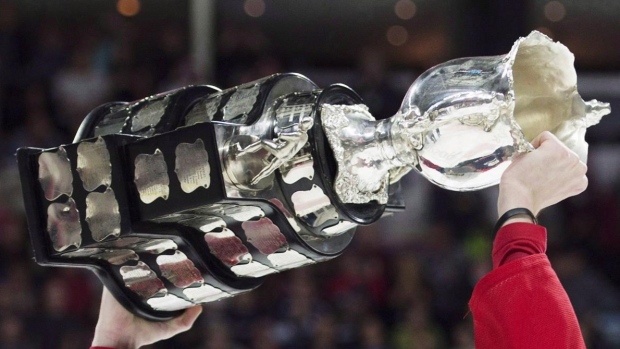 The Western Hockey League champion Prince Albert Raiders were first to bow out of the four-team tournament after going 0-3 in preliminary play. Then Ontario Hockey League champion Guelph Storm fell to the Huskies in the semifinal, setting up a final with the Mooseheads, who earned a bye after topping the round-robin.

Rouyn-Noranda made the 2016 final before falling to the London Knights 3-2 in overtime and is still searching for its first Memorial Cup title, while Halifax won its only championship in 2013.

Here are five storylines to look for in the Memorial Cup final.

Rouyn-Noranda and Halifax have played each other seven times already this month following a hard-fought QMJHL final. The Huskies beat the Mooseheads in six games to win the President Cup and then put up a 4-3 victory against Halifax in the round-robin portion of the tournament.

It's just the second time two teams from the QMJHL will meet in the final, with the Quebec Remparts beating the Moncton Wildcats in 2006. A Halifax win could be a redemption moment with junior hockey's biggest prize on the line, but the Huskies were ranked No. 1 in the CHL for a reason.

"That was an intense final and I think it'll be the same thing. Both teams want to win," said Huskies forward Joel Teasdale.

"We battled through a lot so it's rewarding to be in the final of the Memorial Cup," said Mooseheads forward Benoit-Olivier Groux.

Pouliot made a trade to acquire Dobson, the captain of the Titan, in January after he returned from representing Canada at the world juniors, while Morand and Asselin are going for back-to-back championships with the Mooseheads.

"Two (appearances) in a row, not a lot of players that can say they did that. But my goal is win two times in a row," said Morand.

This year's Memorial Cup has had strong turnouts, even for the games not featuring the hometown Mooseheads, and are sold out again for the final after packing in 10,095 for the Storm-Huskies semifinal on Friday.

While it'll be a pro-Mooseheads crowd at Scotiabank Centre, the Huskies will have a section of travelling fans including friends and family that made the trek east.

"Since the start of the tournament it's been a dream for all of us playing in front of a crowd like this," said Morand. "It's all we wanted as kids and it's finally here."

"We'll need to stay calm because obviously the crowd will be behind them," said Huskies forward Felix Bibeau.

Dobson was acquired by Pouliot exactly for a moment like Sunday's championship game. The 19-year-old blue liner was named QMJHL playoff MVP after producing 29 points in 20 games, and was out on the ice every second shift in a semifinal win over Guelph.

Not only was he expected to shut down the Storm's top line, he paced the offence and still had the energy to create a breakaway opportunity leading to a penalty shot (missed) late in the third period. He has one goal and two assists in four games, but could easily have five goals with the scoring chances he's creating.

"We're not looking at ice time. We managed his ice time during playoffs, during season, but do-or-die it's no choice," said Pouliot. "We'll have to use him."

With just one game to go, no single player has cemented himself as the tournament's most valuable player. A clutch performance on Sunday may be enough to earn the hardware.

Huskies forward Felix Bibeau leads all scorers with four goals while teammate Jakub Lauko is tied for the tournament lead with seven points in four games. Meanwhile, the Mooseheads have had the strongest goaltending of the four teams, with Alexis Gravel putting up a 2.33 goals-against average and .929 save percentage in three round-robin games to lead all netminders.

"Alex has been MVP for us, he's been there in big moments," said Mooseheads forward Arnaud Durandeau. "He was great in the (QMJHL final) series and kept it up at Memorial Cup."