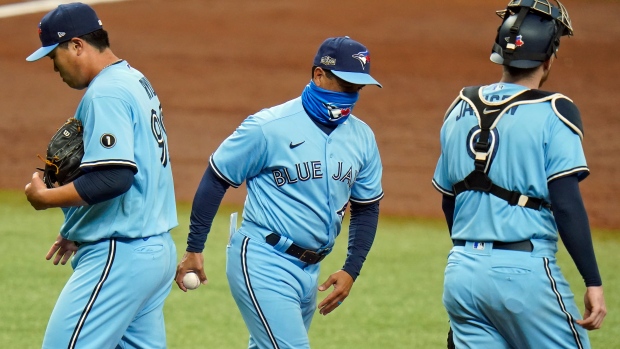 1. Ryu simply didn’t have it

The first half of the Toronto Blue Jays’ pitching plan worked in Game 1 of their AL Wild Card Series against the Tampa Bay Rays on Tuesday, with Matt Shoemaker and Robbie Ray combining to allow just one run over six innings on Tuesday.

In that instance, the bats let them down.

The second half of the plan blew up quickly Wednesday when it became evident early on that ace Hyun-Jin Ryu did not have his best stuff.

With his velocity down to 88.3 mph on his fastball — it averaged 89.8 mph over the course of the season — Ryu didn’t look comfortable from the get-go and his usual pinpoint command of his secondary pitches was nowhere to be found.

The Rays did not let him off the hook, despite only scoring one and leaving the bases loaded against Ryu in the first inning.

The floodgates opened in the second inning, and it was the long ball that did the damage against Ryu, with catcher Mike Zunino bashing a two-run shot to make it 3-0 for the home side, before the Rays loaded up the bases for Hunter Renfroe, who slammed the Jays into a seven-run hole.

Rested with an extra day and ready to go deep, Ryu ended up lasting just 45 pitches and was yanked after Renfroe’s bomb.

“I physically felt good, but I did notice that my velo dipped, especially my fastball,” Ryu said post-game. “But I think the mistakes actually hurt me than the velo itself. In that first inning, they were getting hits off of all my other secondary pitches, which made the game extremely difficult for me.”

With the benefit of hindsight, Ryu doesn’t think it mattered if he started Game 1 or Game 2 with the way he pitched.

“I just had to go out there and pitch well, make sure to not give up hits, especially the long balls, but I just couldn’t do what I was supposed to do,” Ryu said.

2. Defence lets Jays down once again

Ryu was far from sharp, but he didn’t get much help from his defence, particularly shortstop Bo Bichette.

Poor glovework has been a theme all season long and it ended up hurting them at the worst possible time.

In the first inning, Bichette sailed a throw to first that loaded the bases with two outs for the Rays, but Ryu was able to escape by striking out Willy Adames.

Bichette wasn’t as fortune in the second inning when he bobbled a Manuel Margot grounder, which set the stage for Renfroe’s grand slam three pitches later.

Despite it being early, the Jays never recovered.

Perhaps the Andrelton Simmons rumblings at the trade deadline, the flirtations with Didi Gregorius in free agency and the fact they sniffed around to get a sense of the Francisco Lindor price tag show the front office isn’t completely sold on Bichette at shortstop, fully knowing he’d be an elite second baseman with less onus on his arm.

Right now, it’s just something to monitor, but the front office is going to be looking to upgrade the defence in many ways this winter.

It wasn’t all bad defensively on this night as left fielder Lourdes Gurriel Jr. registered the club’s first postseason outfield assist since Joe Carter in the ALCS in 1993 when he threw a seed to Joe Panik at second base to gun down Mike Brosseau in the first inning, while catcher Danny Jansen threw out Randy Arozarena trying to swipe second in the sixth inning.

3. Other than Jansen’s, bats still dormant

Scoring three runs in two games isn’t going to cut it at any time of year, but the Blue Jays’ seventh-ranked offence went completely quiet against Blake Snell, Tyler Glasnow and the Rays’ bullpen.

It’s been proven time and time again that good pitching beats good hitting in the postseason and the Jays got a taste of that theory in a big way over these two games.

The Jays mustered just 12 hits in two games, and the lack of pop was evident.

In the Game 1 loss, Cavan Biggio’s double was the only extra-base hit.

In Game 2, Jansen provided a pair of no-doubt solo homers out of the nine-hole, but the Jays failed to get any traffic on the basepaths for the most part and made things easy on the Rays pitching staff.

The Jays made offensive strides in just about every department this season, but they went out with a whimper.

Jansen can’t wait for a chance at redemption.

“We knocked on the door and next year we’re going to be ready to go through it … We’re hungry for more, so we’ll be back,” Jansen said post-game.

Searching for anything to get excited about, Blue Jays fans latched onto the performance of Nate Pearson out of the bullpen, and it was dominant.

Making just his second appearance since an elbow injury interrupted his season in August, Pearson came out throwing gas, topping out at 101.1 mph via Statcast and striking out five of the six batters he faced.

Pearson alone got 12 on just 28 pitches.

While it didn’t change anything in 2020, the Jays getting Pearson back on a mound and seeing results like that, even if they didn’t have time to build him back up as a starter, is very encouraging moving forward.

No matter what additions are made, Pearson should be able to lock up a rotation spot pretty quickly next spring, even if the Jays are likely to publicly say he’s competing until the end.

5. Wheeling and dealing Rays have done it again

The man on the mound, Glasnow, was acquired from the Pittsburgh Pirates in an absolute heist that also nabbed them outfielder Austin Meadows at the 2018 trade deadline.

It appears the Rays may have done it again with Randy Arozarena, a relatively no-name outfield prospect acquired last off-season from the St. Louis Cardinals in exchange for one of the organization’s top pitching prospects in Matthew Liberatore.

A bout with COVID-19 delayed his start to his Rays career, but since arriving at the end of August the fleet-footed outfielder has become a fixture, crushing to the tune of a .281/.382/.641 slash line with seven homers and four steals in 23 games to close out the season.

The 25-year-old continued that against the Jays, collecting four hits in eight at-bats, including a pair of extra-base knocks, and scoring three runs.

The Jays have made strides and the New York Yankees will always be a threat, but the AL East will continue to go through the Rays because of their ability to find talent via all the avenues available.