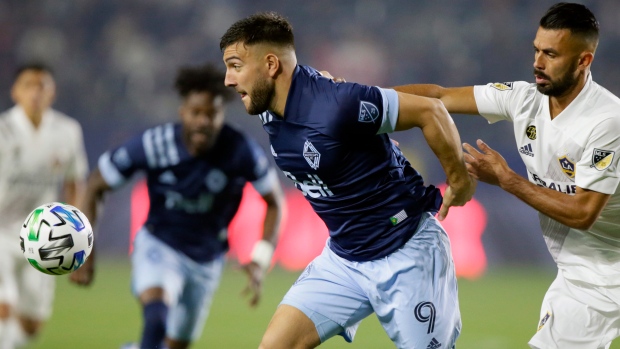 The Vancouver Whitecaps will be missing five players at the MLS is Back Tournament, including forwards Lucas Cavallini, Fredy Montero and Tosaint Ricketts.

The club said defender Andy Rose and defender/midfielder Georges Mukumbilwa are also sitting out the Florida tournament, which starts Wednesday and runs through Aug. 11.

Ricketts has a medical issue while Mukumbilwa is not cleared to leave the country. Cavallini, Montero and Rose are not taking part for personal reasons.

Cavallini, Ricketts and Rose all started in the Whitecaps' last game, a 1-0 win over the Los Angeles Galaxy on March 7, while Montero came off the bench. Ricketts scored the game's lone goal.

"There's no doubt that the players that are not present are very key players and players that help the team," coach Marc Dos Santos told a virtual conference call prior to training Tuesday night in Orlando.

"Now with that being said, it opens the door to other young players ... I don't have a doubt from what I've seen in training and what I've seen from them that we're still going to be a hard team to beat."

While Reyna has 19 goals in 70 MLS regular-season appearances, the other four have a combined two goals in 22 games.

Cavallini, a designated player, cited losing family members to COVID-19 in his decision not to play.

"This was an extremely difficult decision for me," he said in a statement. "I would love to be out on the field with my teammates fighting with everything I have to play for this club and community in Orlando.

"Unfortunately COVID-19 has had a very big impact, taking away two beloved members of my family. I feel that it is best that I remain home to support my loved ones at this challenging time."

Rose and Montero also cited family for missing out.

"My wife is due to give birth on July 17 and my original plan was to be with the team in Florida for our first and possibly second game," said Rose, an Australian-born English defender who is also a diabetic. "However, the sacrifice of potentially missing my daughter's birth and the risk of infection travelling home meant it didn't make sense to go."

Montero, a native of Colombia, cited the pandemic in making the "hard decision" to stay with his wife and daughters in Canada.

"I truly love what I do for a living and have been eagerly waiting to return to the pitch as much as anyone however the health of my family is my No. 1 priority," he said. "My family and I have had a complicated few months not only with being isolated in Canada without family or friends but also with unforeseen health emergencies."

The club did not detail Ricketts' injury.

"I worked hard and was prepared to fight with my team in this tournament. unfortunately, I was not given a choice and was pulled out due to a pre-existing condition," the Canadian international said.

Ricketts told Vancouver radio station TSN 1040 that he had been taking medication to deal with the condition.

"Everything is fine with me health-wise," he said. "Unfortunately the pills affected my immune system and put me in a position where I'm at a much higher risk if I contract COVID."

The club said Mukumbilwa, a Canadian resident who was born in the Democratic Republic of Congo, is not cleared to travel outside of Canada at this time. Mukumbilwa, who signed a homegrown player contract in August last year, has seen just nine minutes of action with the first team.

Dos Santos said the club supported all five players who decided to stay at home,

"This is a tournament that is important, but it's not life or death," he said. "It's not the last tournament we'll be in. So it's important that everybody that's here feels good about being here."

Vancouver opens its tournament July 15 against the San Jose Earthquakes at the ESPN Wide World of Sports Complex in the Orlando area.

Group B is down to three teams — Vancouver, Seattle and San Jose — with the withdrawal of FC Dallas due to 11 positive COVID-19 tests.

Whitecaps CEO and sporting director Axel Schuster says the league is trying to find a solution that would allow the teams in the group to still play three matches. The tournament's original schedule had every team playing three group games that will count in the regular season.

Complicating the matter is the availability of fields, he added.

This report by The Canadian Press was first published July 7, 2020.